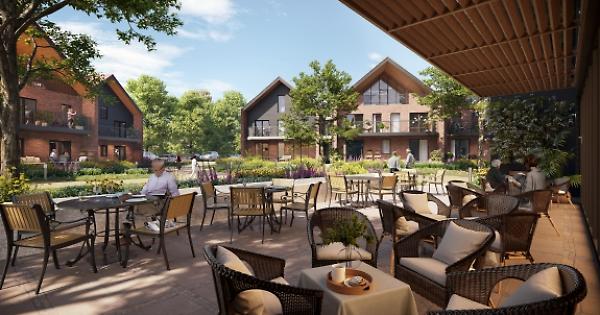 A BIG ‘extra care’ apartment and cottage complex to be built in Shiplake will be called Henley Meadows.

Planning permission for the Â£50million development on land to the east of Reading Road on the southern edge of the village was granted on appeal in 2019.

The six-acre retirement â€œvillageâ€ will include up to 65 new one- to three-bedroom homes, including penthouses and cottages.

Each chalet will have a front and rear garden and off-street parking. Each block of flats will have a lift and stairs.

There will also be a new pavilion containing a bistro, bar, gym and fitness room and care services for elderly residents which will be located in the middle of the development. At the top of the clubhouse there will be space for staff facilities and a night suite for guests.

London developer Galliard Homes, which planned the project in partnership with Probitas Developments and London developer O’Shea, will use brick and timber cladding for the buildings.

The apartment blocks will be two and a half storeys with six apartments on each level.

The houses will have balconies, terraces or private gardens with gables and wooden cladding.

The promoter has also promised 100 new trees and 5,000 mÂ² of planting as well as a vegetable garden and orchard in an attempt to reduce CO2 emissions by 60% and energy costs for residents by 50%.

It will also include a car-sharing club, 35 spaces for bicycles and 86 parking spaces, as well as charging stations for electric vehicles. Architect Nick Baker has assembled the plans and Galliard Homes hopes construction will begin next month and sales will begin in July.

Beatrix Lehnert, Director of Probitas Developments, said: â€œThere is a lack of high quality housing and services for the over 65s in the market and our aim is to provide best in class housing, services and operations. .

“It’s important to us that the customer always comes first, creating ‘healthy homes’ so residents continue to enjoy their lifestyles in high-quality, thoughtfully designed, detail-oriented homes.”

The plans were first rejected by the planning authority in 2017, which said the development would urbanise the countryside and erode the ‘green divide’ between Shiplake Cross and Lower Shiplake.

The company appealed but later withdrew its claim before a hearing was held.

He then relaunched his plans in October 2018, saying development without the care home would have less impact. He said none of the proposed buildings would be more than two stories tall.

The District Council again rejected the request in January 2019, saying it was too large and would further reduce the “green divide”.

He also said residents would not have easy access to shops and services, particularly on foot, due to the rural location and that visibility at the proposed entrance was poor and potentially dangerous.

The parish councils of Shiplake and Harpsden opposed both demands, along with the Chiltern Society and 63 neighbours.

But a town planning inspector overturned the district council’s decision in October 2019, saying the benefits of the development outweighed any damage to the landscape.

Shiplake Parish Council opposed the latest request, saying the development was not in line with the village’s Emerging Neighborhood Plan.

Councilor Chris Penrose said the designs were “unsympathetic” and the flats would be “visually intrusive”.