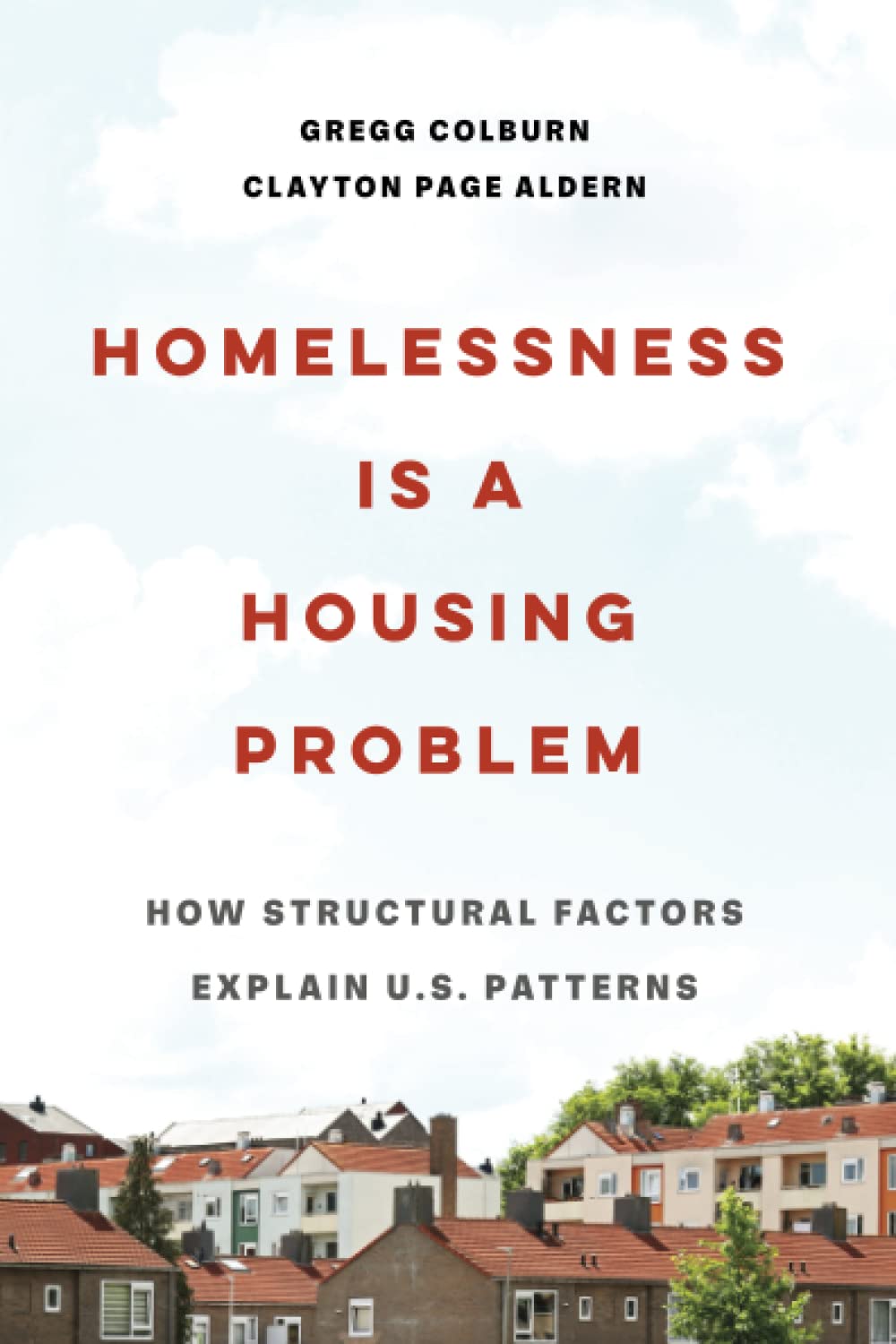 Homelessness is a housing problem

Buy from Bookshop.orgBuy from Amazon

The main characters of Homelessness is a housing problem are not homeless people; they are cities. The central question of the book is: What could explain the substantial regional variation in per capita homelessness rates in the United States? The answers may not surprise everyone, but the authors’ journey to their conclusions will inform and inspire.

Gregg Colburn teaches at the University of Washington, where he studies housing policy, housing affordability, and homelessness. Clayton Page Aldern is a Seattle-based data scientist and policy analyst. If these biographies have you wondering if this book is full of numbers, tables, and endnotes, the answer is a resounding yes. While reading the first chapter, I texted a family member who works in statistics and told him that I might need his help. However, as I read, I found the writing style very readable. The authors include stories, illustrations, and summary sentences with each argument, and I was never frustrated or bored.

The data covers the 35 largest metropolitan statistical areas in the United States from 2007 to 2019. Colburn and Aldern begin by presenting the current state of knowledge about homelessness in the United States. Most importantly, they cover the relationship between structural racism and discrimination in housing, how we count homeless people, and the various nonprofit and government organizations that track housing and homelessness statistics. shelter. They acknowledge throughout the book that the pandemic has both exacerbated the housing crisis and led to new solutions.

Colburn and Aldern consider many explanations for the substantial variation in homeless populations per capita across the country. Their analysis of individual and household vulnerabilities and attributes (which include mental illness, drug use and poverty) will be familiar to anyone who has sat on city council or planning and zoning meetings. At the metropolitan level, the authors show, homelessness is more a symptom of wealth than of poverty. Very wealthy cities, like Seattle and San Francisco, have a much bigger problem of homelessness than poorer cities, like Detroit and Chicago. A section on the effect of race on homelessness concludes that “like other individual factors, race may explain who becomes homeless in a given city, but this does not explain why one city has more homelessness per capita than another. The authors then examine the local culture and context (eg, weather, politics, local social arrangements). These factors also do not explain regional variations.

If you are a renter at the higher end of the income spectrum, you can choose to spend less on housing if the need arises. If you’re a cost-laden tenant on the lower end of the income spectrum, that’s not true. Rents do not fall to zero. Instead, they reach a floor determined by the local housing context and the rules that govern the quality of housing.

In more succinct terms, there are simply more ways to “make it work” in St. Louis than in San Francisco.

In the final part of the book, the authors present responses to the housing crisis, focusing heavily on market factors. They question economic development agencies that bring employers and employees to an area while taking a “laisser-faire approach to housing those employees.” They also criticize cities’ reliance on single-family zoning: “Residential zoning is one of the seemingly innocuous rules and regulations that has played a major role in the housing crises rocking cities across the country. I wish the authors had talked more in this section about the monetary cost of Support part of permanent supportive housing, one of many solutions needed to address homelessness, but that may simply be beyond the scope of this book.

Throughout the text, Colburn and Aldern address the mindsets of cities and their citizens. Sometimes I find myself in conversations about solving the housing crisis that boil down to this choice: one person thinks we could fix everything if we just change the laws and structures, while the other thinks everything what we have to do is to change everyone’s heart. The truth is that we have to do both. There are zoning codes, laws and structures that need to be changed, but there is no point in changing them if our society does not collectively believe in change. Colburn and Aldern say it in their final chapter: “First, a successful response will embrace homelessness as structural in nature, as opposed to a product of poor decisions or social deviance; and second, he will see people not housed by this structure as fully human.

Another powerful theme the authors return to is the decommodification of housing. They write: “Rather than conceptualizing housing solely as a private good, produced through market transactions, housing must be decommodified. Shelter is fundamental to human survival and requires different treatment than iPhones. Viewing housing as a basic human right for all – rather than a means of income for homeowners or a way for homeowners to create wealth – is an important way to love our fellow man.

Colburn and Aldern offer a lot more freebies to their readers than I can tell in this review. There is plenty of material in the book for people wondering how to advocate for affordable housing, churches discerning to donate or lease land for housing, and communities who want to be proactive and avoid a housing crisis. .