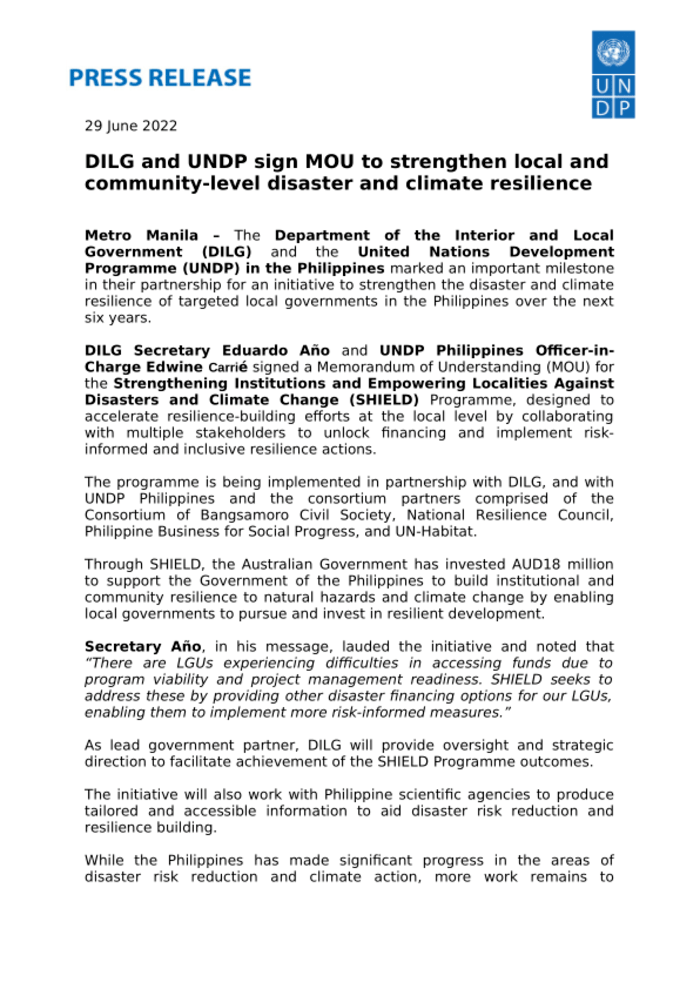 Metro Manila – The Department of Interior and Local Government (DILG) and the United Nations Development Program (UNDP) in the Philippines have marked an important milestone in their partnership for an initiative to build resilience to disasters and targeted local government climate in the Philippines over the next six years.

DILG Secretary Eduardo Año and UNDP Philippines Officer Edwine Carrié signed a Memorandum of Understanding for the Institutional Strengthening and Local Empowerment Against Disasters and Climate Change (SHIELD) program, designed to accelerate resilience-building efforts at the local level by working with multiple stakeholders to unlock funding and implement inclusive and risk-informed resilience actions.

The program is implemented in partnership with DILG, and with UNDP Philippines and consortium partners consisting of Bangsamoro Civil Society Consortium, National Resilience Council, Philippine Business for Social Advancement and UN- Habitat.

Through SHIELD, the Australian Government has invested AUD 18 million to help the Government of the Philippines build institutional and community resilience to natural hazards and climate change by enabling local governments to pursue and invest in resilient development.

Secretary Año, in his message, welcomed the initiative and noted that “Some LGUs are having difficulty accessing funds due to program sustainability and project management readiness. SHIELD seeks to address these issues by providing alternative disaster funding options to our LGUs, allowing them to implement more risk-appropriate measures.

As the lead government partner, DILG will provide oversight and strategic direction to facilitate the achievement of SHIELD program results.

The initiative will also work with Philippine science agencies to produce tailored and accessible information to help reduce disaster risk and build resilience.

While the Philippines has made significant progress in the areas of disaster risk reduction and climate action, there is still work to be done to build resilience. The cost of disasters to the country is dramatically high, with local governments and communities bearing the brunt.

“The SHIELD program recognizes the vital role of local governments not only in responding to the crisis, but also in driving transformative resilience actions that would ultimately benefit communities. SHIELD aims to build capacity at the LMU and community level, as they are usually the first responders in times of crisis,” said Mr. Carrié of UNDP Philippines during the signing of the MoU.

Located along the typhoon belt, the Philippines experiences an average of 20 typhoons each year. Last December, Typhoon Odette hit the country, affecting 9 provinces in 7 provinces and affecting more than 8 million people. According to the national archives, the agricultural sector suffered damage estimated at nearly 16 billion pesos, while damage to infrastructure reached more than 17 billion pesos.

The six-year program will be implemented in 11 of the country’s most vulnerable provinces to the effects of disasters and climate change. Some of the target areas include Albay, Agusan del Norte, Agusan del Sur, Cagayan, Cebu, Davao Oriental, Eastern Samar, Northern Samar, Pampanga, Pangasinan and Quezon. The program will also cover Metro Manila, given its vulnerability to earthquakes and economic importance, as well as Bangsamoro Autonomous Region in Muslim Mindanao (BARMM), with the growing disaster and climate vulnerability of conflict-affected areas.

In addition to the DILG, the Office of Civil Defense and the Department of Science and Technology will also co-lead components of the SHIELD program, while the BARMM Department of Home Affairs and Local Government will serve as the primary focal point. for the Bangsamoro region. [E]