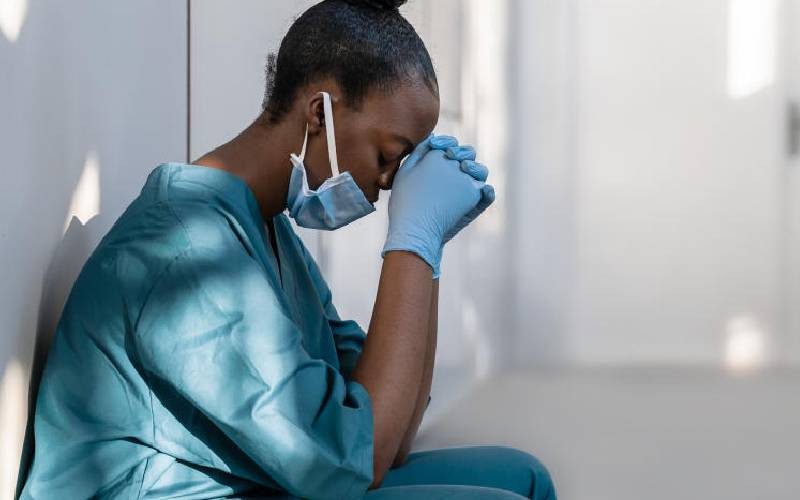 Like their patients, physicians are also not immune to mental stress, worry and burnout, depression and post-traumatic stress disorder.

Internal medicine consultant and health advocate Dr. Yubrine Moraa says the pandemic has been a time that has tested doctors. In her case, she had to seek help for trauma after ‘trying to be a soldier’ ​​had reached her human limits and she lists ‘long working hours and watching colleagues succumb’ as some sources of anxiety and panic, especially when she experienced symptoms similar to Covid -19.

“I would sit and cry wondering if I was next, but everyone expected me to show up and be there,” Dr Moraa recalled. “There were those mornings when my body wouldn’t even move.”

Her family life was also affected because “my children couldn’t run forward and hug me. They knew mom had to clean up and I knew they lacked motherly love.

Another thing she struggled with was “the stigma against them by our neighbors because their mother is a doctor and might be the one to pass the disease on to them.”

Dr Moraa asked for help when she realized she was snapping at the slightest provocation and she advises her colleagues to always be self-aware and especially open to debriefing after having treated traumatic cases.

“We’re only human, the perception is that we chose this career because we’re made of steel, there’s this expectation that we won’t be affected, people shouldn’t think we have superpowers , we are just ordinary people doing extraordinary work,” she said.

Then there are situations where a doctor is not easily understood by society while undergoing treatment. Like Dr. Patrick Boruet, a pharmacist, who was diagnosed with bipolar disorder in 2011. Since then, he’s been on medication with occasional compliance issues.

He remembers his boss wondering why he was taking too much sick leave every time he had to go to Nairobi for a doctor’s appointment.

“When you’re bipolar, you lose friends, not because they don’t accept you, but because maybe you’ve had a relapse and you’re doing something you regret, so it shakes your confidence,” said Dr. Boruet whose life had a turnaround in 2015 after relapsing and doing things that caused problems in his workplace and in his family.

He created the Bipolar Heroes Foundation to offer support and “even newly diagnosed people can join in and learn about the challenges because some drugs cause bad side effects, and support is needed.”

“We need to understand that bipolar can be managed, it can affect anyone, speak out because there is hope, accept being vulnerable,” said Dr Boruet urging the government to equip facilities public health medicines from their essential medicines list, especially those of the second generation as the first generation caused more side effects.

Dr Davji Atellah, General Secretary of the Kenya Medical Practitioners, Pharmacists and Dentists’ Union (KMPDU), says doctors are human and he sees financial constraints as the main cause of mental stress, especially after decentralization has led to delays in salaries, which led to the blacklisting of doctors. CRB on unpaid loans.

Dr Atellah adds that the long working hours due to the shortage of workers and doctors with underlying illnesses are only making the situation worse, so some have reached a mental breaking point and have opted for suicide. .

Dr. Davji also argues that some doctors experience trauma after performing delicate surgeries and losing patients, especially when they believe death was preventable.

The lack of proper equipment and medication also weighs on them and “the Union has a Doctors Wellbeing Committee which works to remove the stigma around the mental health of doctors who provide them with psychosocial support and helps find safe spaces where they can open. »