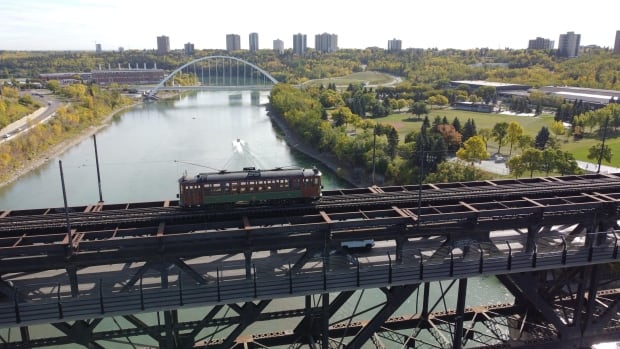 One of Edmonton’s most iconic structures, the High Level Bridge, needs a major overhaul to extend its life by 25 years – or the city could replace it, according to a new report.

City engineers estimate an extensive rehabilitation will cost between $135 million and $270 million, according to the report, with construction likely to begin in 2025.

“Every 25 to 30 years, most infrastructure will need a bit of attention,” said Pascale Ladouceur, director of the city’s infrastructure planning and design branch. “So there are interventions that we need to do to keep it in good working order.”

The main bridge needs work above and below the asphalt, parts of the steel trusses need to be replaced or capped and the concrete piers at the base need to be repaired, Ladouceur said.

“Anyone walking across the bridge has probably noticed that there’s a protective coating peeling off in some places,” she said.

The bridge is 777 meters long, has two decks with the streetcar at the top, and connects downtown 109th Street to the south side of the river.

The city’s report outlines three options for the bridge: repair rather than replace components, giving the bridge another 15 years; a complete rehabilitation while expanding or improving the upper deck and the narrow shared-use path on the east side; or build a second bridge next to the existing one, or replace it completely.

The city considered replacing the bridge, in part to accommodate more public transit in the future, Ladouceur said.

This would be twice the cost of rehabilitation, but would save on maintenance and repairs 50 years from now, she said.

The city also considers the historical relevance of the infrastructure.

“Spirit of the Bridge”

The bridge was a key factor in the amalgamation of the town of Strathcona with the city of Edmonton in 1912, said town archivist Kathryn Ivany.

It was the only bridge in Canada at the time to carry four modes of transportation: rail, streetcar, vehicle and pedestrian/cyclist, and it eliminated the need for ferries on the North Saskatchewan River, she said.

“The ideal is minimal intervention,” Ivany said. “So anything replaced should still retain the spirit of the bridge, along with the design elements to keep it as authentic to the original as possible.”

The bridge is protected by provincial and federal historic designation.

Demolition of the bridge would require the city to rescind its designation under the Municipal Historic Resources Bylaw, the report said.

The report includes comments from the High Level Line Society, which is considering a multi-use lane on the upper deck of the bridge.

The idea aligns with the city’s long-term goals of connecting all quadrants of the city, developing high-quality active transportation networks and making them more accessible, Ladouceur said.

The council’s executive committee is due to consider the report at a meeting on April 13.

If councilors accept the rehabilitation recommendation, administration will need to determine the cost before presenting it to council in November, ahead of the 2023-2026 capital budget cycle.

Women walk miles for water, but play a negligible role in its management