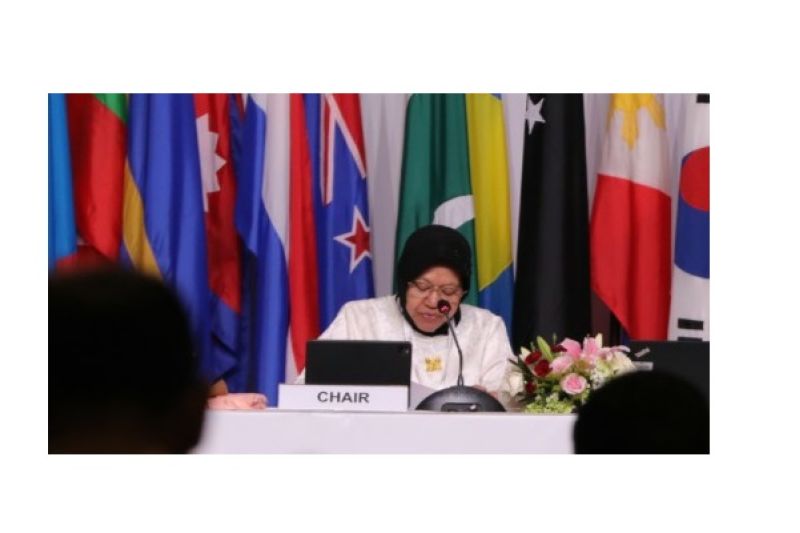 Representing the President of the Republic of Indonesia Joko Widodo, the Coordinating Minister of Human Development and Culture Muhadjir Effendy was present to officially open the meeting. In his speech, Muhadjir highlighted the commitment and strong support of the Indonesian government in realizing and protecting the rights of persons with disabilities. “It shows in the implementation of policies and programs related to people with disabilities,” said Muhadjir Effendy.

In her opening speech, UNESCAP Executive Secretary and UN Under-Secretary-General Armida Salsiah Alisjahbana expressed her gratitude to the Indonesian government for organizing this event, in particular to the Minister of Social Affairs Tri Rismaharini.

Armida said that the objectives of this conference were to review, assess the progress of the implementation of Incheon’s strategy after 10 years. Second, build on the commitment of ESCAP members to improve accessibility for persons with disabilities, including access to inclusive public transport and social reintegration efforts that have been carried out.

The third objective is to make some recommendations on the future plans that will mark the 4th decade from 2023 to 2032 which will be formulated in the form of the Jakarta Declaration.

“With this provision, it marks an important move in Indonesia to make people with disabilities the objects of assistance recipients, to become subjects who have rights and are actively involved in decision-making related to their own needs”, declared the Minister of Social Affairs.

Government Regulation 70 of 2019 on planning, implementing and evaluating the respect, protection and fulfillment of the rights of persons with disabilities.

“Recently, Indonesia also passed the Crime of Sexual Violence Act No. 12 of 2022 as legal protection for women and children from all forms of sexual violence with 1/3 heavier penalty if the victim is a disabled person,” Risma said.

To further empower and protect people with disabilities and create an inclusive society, Indonesia has launched the Indonesia Visualize, Indonesia Hear and Indonesia Take Steps programs. “Through these programs, accessibility and mobility tools are distributed and cataract surgery and physiotherapy are carried out through awareness campaigns for inclusion and capacity building,” said Minister Risma.

In 2021, the Ministry of Social Affairs distributed 6,581 units of assistive devices, including 757 units of electric wheelchairs, 354 units of commercial tricycle motorcycles, 5,420 units of adaptive sticks and 50 units of blind water sensors. “In the meantime, in 2022, it is expected that 10,000 aid tools can be distributed,” added the minister.

The Indonesian government is also strengthening its commitment through patented innovations and assistive technologies such as the Smart Blind Stick, and integrating the values ​​of Gender Equality, Disability and Social Inclusion (GEDSI) into its designs. universal.

In her statement, the Minister of Social Affairs also highlighted Indonesia’s commitment and concrete steps to overcome the stockpiles. In response to the high prevalence of stockpiling for people with disabilities, several efforts have been made, including enforcing laws prohibiting stockpiling and educating families and communities.

Protection against natural disasters, the government formulates inclusive Disaster Risk Reduction (DRR) regulations at national and regional levels. “Some of the best practices of inclusive DRR can be seen in the Disaster Preparedness Village and the Disaster Resilient Village Program, which involves people with disabilities as disaster volunteers such as Difagana (Disaster Voluntary Workers with Disabilities) and the formulation of technical guidelines in the event of a disaster. sign language management for the deaf,” said Social Affairs Minister Tri Rismaharini.

To increase economic independence, Indonesia is strengthening skills development, entrepreneurship training and providing accessibility/mobility tools needed by people with disabilities to carry out their entrepreneurial activities.

“Furthermore, access to employment opportunities is also enhanced through the inclusive public-private partnership. There is evidence that there has been an increase in income from entrepreneurial activities that are inclusive for people with disabilities,” she said.

Indonesia recognizes that there is still a lot of work to be done. Then it will focus on improving monitoring and evaluation of measurable policies and programs, roadmaps for adaptive social protection, more accountable disaggregated data, meaningful participation of people with disabilities in DRR and economic empowerment, and global partnerships in humanitarian linkages.

Review: "Ice Cold", on hip-hop bling, and "Status and Culture"