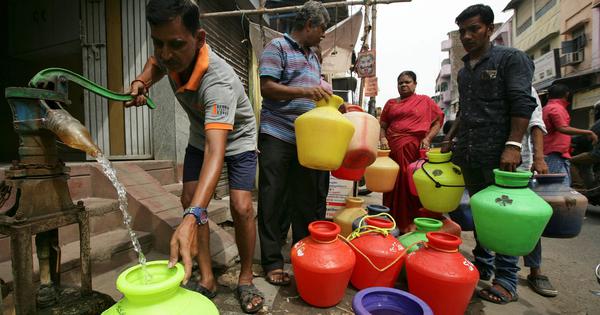 Central government water programs emphasize community groundwater management in a decentralized manner, but by and large these programs are silent on the availability, training and deployment of a workforce. skilled labor for this task, especially in rural areas.

Water management at the most decentralized local levels is often a part-time, voluntary or unpaid activity. It neither helps cultivate water security nor cultivates meaningful livelihoods to manage precious water resources, according to an analysis by global research organisation, the JustJobs Network, with Bengaluru-based Arghyam , which works for safe and sustainable water.

More than 80% of India’s urban and rural domestic water supplies are served by groundwater. India has 18% of the world’s population, but only 4% of the world’s renewable water resources on its territory. More than 250 of 700 districts have ‘critical’ or ‘overexploited’ groundwater levels, according to the most recent Central Ground Water Board Data from 2017.

There are several water supply and management programs in India, with the aim of ensuring water security in villages, including one for supplying good quality piped water to villages across the Mission Jal Jeevanfor groundwater management by Atal Bhujal Yojana and for water and sanitation under the Swach Bharat Mission.

Workers in these programs must be from the community, have scientific knowledge of ground and surface water, have the skills to help their community plan water use based on its availability, and build, operate and maintaining structures and systems to ensure water security. .

Rural unemployment was 8.35% in February, according to Data from the Indian Economy Monitoring Centre. On World Water Day, our story highlights the urgent need to train and upskill local workers in water management to meet the challenges of managing limited resources. . This can help India solve two crises: one of greater water insecurity as resources are depleted, especially with global warming and the second of a lack of gainful employment for the large workforce in the country.

India is the largest user of groundwater in the world, attracting 25% of global groundwater. Water security is critical to India’s continued socio-economic development. Almost 62% of India’s irrigated agriculture depends on groundwater, while some 85% of rural India’s drinking water supply depends on groundwater. Groundwater, important for both vital activities and livelihoods, is a common resource and requires proper conservation and management.

There are multiple government agencies and programs on water, which often do not have convergence on the ground. Additionally, many of these systems recognize the need for a qualified water cadre for effective and efficient implementation of the systems, but most of the systems are silent on how to ensure availability. of this qualified framework.

We contacted the Ministry of Rural Development and the Department of Drinking Water and Sanitation on Thursday March 17, but received no response from them. The story will be updated when we receive a response.

Even though there might be an estimated cadre of 5 lakh to 10 lakh trained personnel in the country (assuming at least two to three people per village have been trained) to undertake various water-related activities, these workers are largely invisible, and they have no job security beyond the program period.

Moreover, there is no data at the village, gram panchayat or district level of this qualified cadre, nor is there a mapping of the skills required for proper water management. Each time a new program is launched, new staff members are trained, resulting in a multiplicity of efforts. There is also insufficient data to understand the effectiveness, sustainability and gap between supply and demand of all these people working on rural water issues.

Through these government programs and civil society initiatives, community members receive sporadic training and engage on a voluntary basis on aspects of water management in the village. The tasks and responsibilities of these trained workers range from a worker digging wells, a mason or plumber for laying and maintaining pipes, a pump operator, “bhujal jankaars” as para-hydrologists, ” jal sahelis” responsible for the desilting of ponds, “dhara sevaks” for the management of spring remittances and other community resource persons.

But even in the flagship programs, the tasks of these qualified staff are not defined as “professional roles and responsibilities” and there is no clear mobilization, development and associated remuneration, an analysis of the orientations of the Mission Jal Jeevan and the Atal Bhujal Yojana To display. Consequently, even if civil society groups mobilize and train these workers, they must maintain their interest in undertaking water management without a path to income and professional advancement.

There have been some attempts to integrate qualified managers through “full-time jobs” such as Jal Surakshak in Maharashtra, who were trained and certified monitor the groundwater situation and manage water level measurement instruments, well identification and digital information sharing with the Groundwater Exploration and Development Agency at different block and district headquarters.

Through subsistence missions such as the Mahatma Gandhi National Rural Employment Guarantee Programthe National Rural Livelihoods Mission and the State Missions for Rural Livelihoods, workers were engaged at the village level for the construction, operation and maintenance of the water works on a contractual basis. “Swacchagrahis” and Accredited Social Health Activistsare engaged in water quality monitoring, in addition to the other tasks they perform, either part-time or on an incentive basis.

In a few states, the traditional jobs of water managers such as kollalus in Garhwaland chowkidars in the Kumaon hills in Uttaranchal, or havaldar, jagliyas or patkaris in Maharashtra, have been “formalised” with defined roles, responsibilities and compensation. However, despite efforts towards ‘job creation’, most community resource persons continue to engage in voluntary activity or shramdaan. (gift of work).

Government-formed sub-committees, such as Village Water and Sanitation Committees and Water user associations at the gram panchayat level, should play an important role in ensuring proper planning and implementation of water management. However, the capacity of these bodies is insufficient and they often require hand-in, for example for tasks such as mapping water resources and even holding regular meetings, other non-profit groups or the civil society, found researchers from JustJobs Network during conversations with associations working on water management.