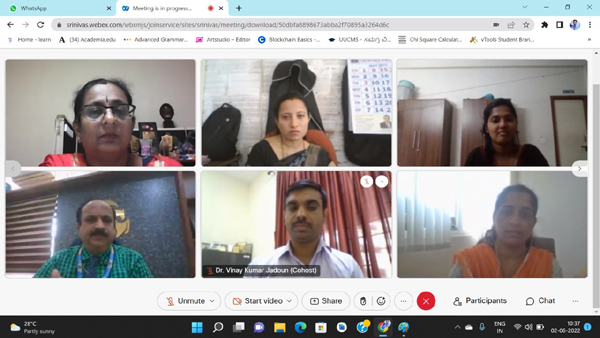 Mangaluru, June 3: In collaboration with the IEEE Mangaluru subsection, the student branch of the IEEE Srinivas University organized on June 2 in virtual mode the national level paper competition for doctoral students. About 50 university researchers registered and submitted their scientific papers. Among the articles received, 15 communications divided into two categories were presented.

The virtual inauguration of the competition took place at 10 a.m. Dr. Vinay Kumar Jadoun, SAC Chairman, IEEE Mangaluru Subsection, Associate Professor, Department of Electrical and Electronic Engineering, MIT Manipal, was the chief guest. In his address, he explained the importance of academic writing. “Scholarly writing is part of research. The researcher must draw his motivation from within. Research does nothing new. Each researcher adds a new concept to existing work. This novelty is its contribution to the respective field. 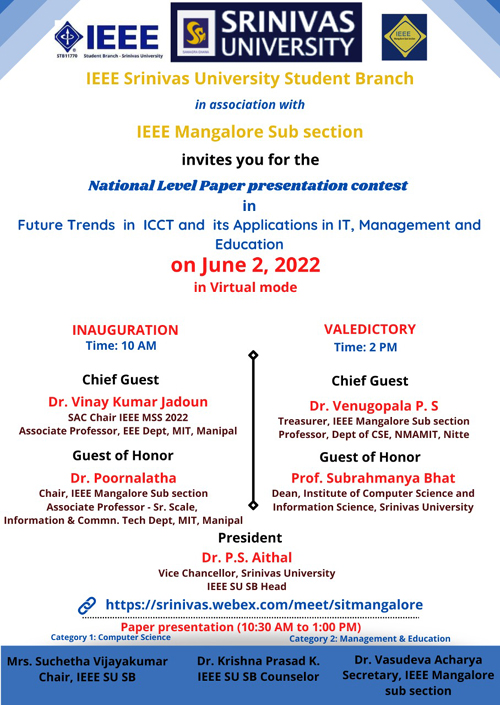 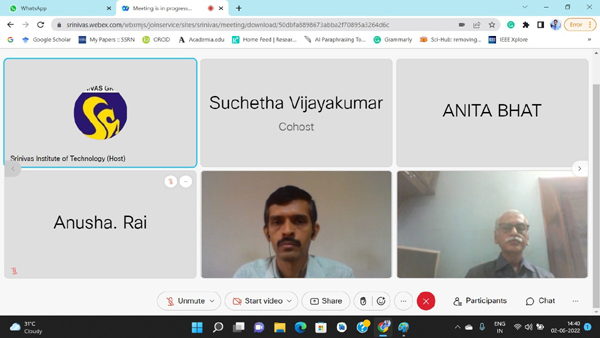 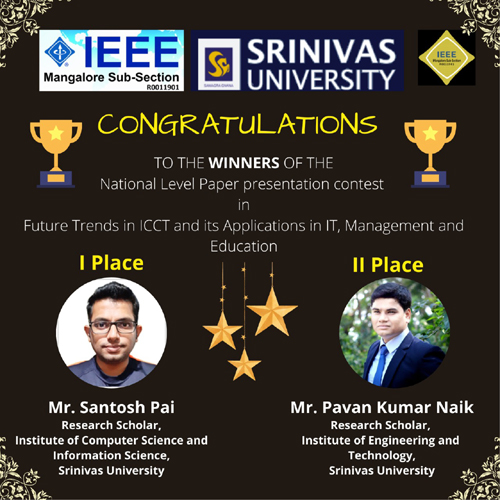 Dr. Poornalatha, IEEE Mangaluru Subsection President was the guest of honour. in her address, she said, “Scholarly writing increases a scholar’s critical thinking. To improve his skills, paper presentations will help a lot. The program was chaired by Dr. PS Aithal, Vice Chancellor of Srinivas University, Head of IEEE Student Branch of Srinivas University. In his presidential address, Dr PS Aithal said: “There is enormous research potential in the development of new technologies. Advancements in technology have made our lives easier. These days, finding the right information for our research is within reach due to advancements in technology. The quality of research only improves when we publish our work”.

The National Level Paper Contest farewell program went virtual on June 2. Dr. Venugopal PS, Professor, Department of Computer Science and Engineering, was the chief guest. “Every published paper must contain original work. The research paper will be there forever once published. Therefore, utmost care should be taken while writing a research paper,” he said in his farewell speech.

Dr. Srinivas Rao Kunte, a professor at Srinivas University, was the guest of honour. In his address, he said, “Research is a lifelong process. Our original work will be very valuable. The researcher must focus on learning and improving the work”. Dr. PS Aithal, Vice-Chancellor of Srinivas University, Head of IEEE Student Branch of Srinivas University will be the President, said that “researchers should contribute something to society. Participation in competitions will give a lot of experience to the researcher. Every information received in the form of suggestions by experienced researchers will be of great help for the improvement of research work.

Santhosh Pai, Researcher at the Institute of Computing and Information Science, University of Srinivas, Mangaluru won the Best Paper Award for his research paper titled “Study of the Most Critical Security Vulnerability of the Decade : Log4JShell” won first place and Pavan Kumar Naik, Research Scientist, Institute of Engineering and Technology won second place for his paper entitled “Importance of Identifying Γ-H2ax Foci In Nucleus Cell”. Dr. Krishna Prasad K, Student Branch Advisor, IEEE Srinivas University welcomed the guests. Vinayachandra, Vice President of the Student Branch of IEEE Srinivas University offered a vote of thanks. Suchetha Vijaya Kumar, President of the Student Branch of IEEE Srinivas University, participated in the program. Professor Subrahmanya Bhat, Dean, Institute of Computing and Information Sciences, University of Srinivas present on this occasion. The program was followed by 60 researchers.