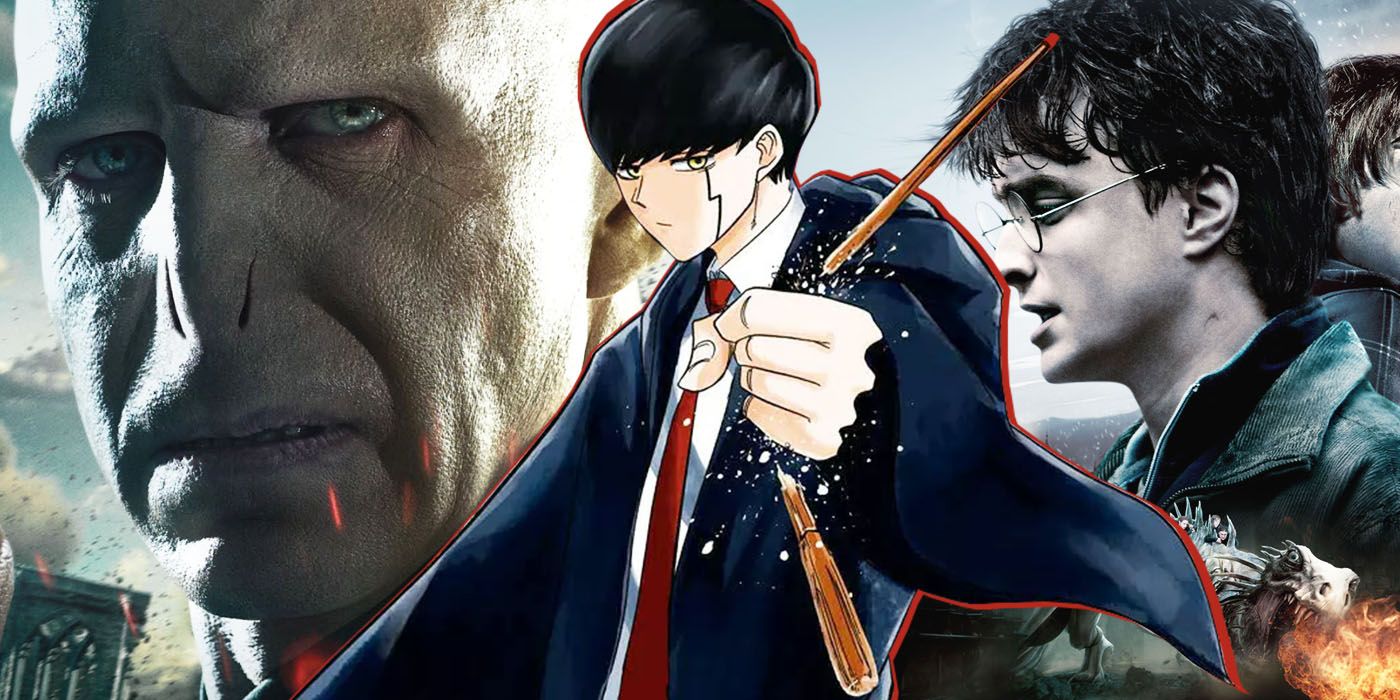 In Volume 5 of the Mashle manga, Mash Burndead faces discrimination similarly to the world of Harry Potter. Lord Voldemort is here in all but name.

Mashle: Magic and Muscles is a popular ongoing fantasy manga written and drawn by Hajime Komoto. The story features non-magical hero Mash Burndead, who must succeed with brute strength and a bit more in a realm dominated by magic. He was even part of the world’s version of Hogwarts School of Witchcraft and Wizardry, but he can’t keep up the facade any longer.

Previous volumes of Mashle echoes the social criticisms found in my hero academia, both series depicting the consequences of a society where people born with “bad” talents are looked down upon. Now in volume 5, Mashle takes it a step further and shows what happens when Lord Voldemort’s way of thinking is accepted as the norm.

RELATED: The Spy X Family Discovers New Art Ahead of the Anime’s Premiere

The crime of being born without magic in Mashle

In volume 5 of Mashle, Mash and his friends at the magic school of Easton continue their battle against the Magia Lupis organization, in which Mash’s team wins a narrow and hard-won victory. For a while, Mash is totally relaxed – until he is put on trial after his non-magical status is revealed. He faces the Bureau of Magic and the Divine Visionaries, all of whom hold his fate in their knowing hands.

They reaffirm the divine importance of magic, asserting that magical power is a gift from God and a mark of humanity’s true potential. Non-magical people, though rare, are seen as a threat to the delicate balance of power in the magical world, and Mash is labeled a bug in the system. For the Bureau of Magic, Mash’s previous achievements and victories at Easton mean nothing if he is an “inferior” being who upsets the system.

It is coldly reminiscent of the Harry Potter Ministry of Magic after Voldemort and his Death Eater followers conquered it as a puppet state. Voldemort strongly believes in the superiority of wizards and views Muggles as worthless inferiors to dominate; even Muggle-born wizards are viewed with suspicion and contempt. In fact, Voldemort’s Ministry suspects that Muggle-born wizards outright stole their powers and wands from half-blood and pure-blood wizards, and they are also considered a bug in Voldemort’s magical superiority system. .

In Harry Potter and the Deathly Hallows, Harry, while in disguise at the Ministry, encounters a handful of Muggle-borns falsely accused of stealing magic and wands and helps them escape. When the wizarding world is at its worst, magic is used as an excuse to abuse and oppress the innocent – and the same happens in Mashle. Worse still, the Bureau isn’t controlled by an evil wizard – that’s just the normal way of things. In Mash’s world, Voldemort’s worldview has already won.

RELATED: Dr. Stone Commemorates the Ending of the Manga with a Beautiful Retrospective Video

What this means for Mash in the future

Luckily for Mash, Easton’s manager Wahlberg, a replacement for Albus Dumbledore, steps in on Mash’s behalf. Even the Bureau is somewhat understanding, though the divine visionaries disagree. Ultimately, all parties agree that Mash can avoid execution as a “magicless” person if he can become this year’s divine visionary and defeat the criminal organization Innocent Zero, a group that all wizards fear. Mash is eager to accept the challenge and predicts a quick victory with his fists.

This turn of events has serious implications for the future of Mash, and perhaps for the entire magical world. Until now, Mash had rubbed shoulders with his incredible strength and others’ ignorance of his lack of magic status, but that’s over now. He’s been exposed and will fight against the current of the world to prove his worth – or die trying. He can no longer be an apathetic, easygoing student – Mash is now a reluctant celebrity, the boy who threatens the entire world order with the audacity to use muscle instead of magic. Soon the students of Easton and the whole wizarding world might start to take sides and engage in fierce debate over the subject, and decide whether Mash is a worthy exception to the rule or just a worthless bug in the system after all.

This trial should bring out Mash’s inner character and show what he’s really made of, and he’ll show the world what he can do when his existence and validation as a human being is threatened. If Mash plays his cards right, he just might prove the world’s “pureblood” bias wrong and open the doors for all the other lack magics locked away. As a shonen hero, MashleThe determined protagonist of is sure to find a way.

KEEP READING: How a Journey to the West Magical Weapon Connects Dragon Ball and Naruto

Super Crooks: all the changes the anime made to the comic

Louis Kemner has been a fan of Japanese animation since 1997, when he discovered Pokémon and Dragon Ball Z in elementary school. Now, he’s a bigger anime/manga fan than ever and is ready to share what he knows with readers around the world. He graduated from high school in 2009 and earned his bachelor’s degree in creative writing from UMKC in 2013, then put his skills to work in 2019 with CBR.com. He is always on the lookout for a wonderful new anime to watch or a manga series to read. You can reach him at [email protected]

COVID-19: NB health authorities will remain below the red level