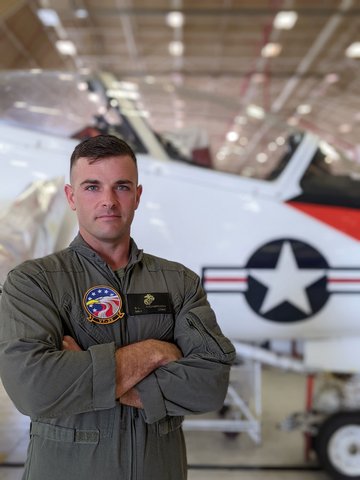 KINGSVILLE, Texas – A native of McMinnville serves in the United States Marine Corps alongside Naval Airmen who learn the skills they need to perform missions around the world.

“I joined the Marine Corps for the opportunity to protect, to serve, and to challenge myself to become better every day,” Richardson said. “I also wanted to be a positive influence as an active member of society for my three children to admire.”

The skills and values ​​learned in the Marines are similar to those found in McMinnville.

“Growing up in a small town taught me the importance of community and how the support of others around you can help you achieve your goals,” Richardson said. “My family and my accomplishments would not be possible without the support system our hometown has placed around us.”

“I enjoy working in an environment where everyone reflects and learns from each other’s mistakes,” Richardson said. “It makes us better airmen, so that we can accomplish the missions we are called upon to carry out.”

After graduation, pilots continue their training to learn how to fly a specific aircraft, such as the F/A-18 Super Hornet strike fighter, F-35 Lightning strike fighter or SH-60 helicopter Seahawk. These planes take off and land on Navy aircraft carriers at sea.

Aircraft carriers are often the first response to a global crisis due to their ability to operate freely in international waters anywhere on the world’s oceans.

Since the commissioning of the USS Langley 100 years ago, the nation’s carriers and carrier air wings have projected power, maintained control of the seas, enhanced deterrence, provided humanitarian assistance and disaster relief, and maintained enduring commitments around the world.

“The aircraft carrier is the centerpiece of our United States Navy, our flagship, and a constant reminder to the rest of the world of our enduring maritime presence and influence,” said Rear Admiral James P. Downey, USN, Director of the (PEO) Aircraft Carriers program. “These ships touch every part of our navy’s mission to project power, provide control of the seas and deter our adversaries.”

With more than 90% of all commerce traveling by sea and 95% of global telephone and Internet traffic carried by fiber optic cables lying on the ocean floor, Navy officials continue to emphasize that prosperity and the security of the United States depend directly on ready sailors and a strong navy.

Serving in the Department of Defense means Richardson is part of a team that takes on new importance in the United States’ focus on rebuilding military readiness, strengthening alliances and reforming business practices in the US. support of the national defense strategy.

“Both the Navy and the Marine Corps are an important part of national defense,” Richardson said. “Our constant presence around the world allows us to react quickly to crises that may affect us or our allies.”

Richardson has many opportunities to achieve accomplishments during his military service.

“My greatest accomplishment in the Marine Corps is to continue to have a successful family that gets stronger every day,” Richardson said. “We face a life with far more external stressors than most families. »

Richardson is proud to serve the country in the Marine Corps.

“I’m blessed to be able to serve in the Marine Corps,” Richardson said. “I am able to continue this life as a fighter pilot. To serve is an opportunity to be a contributing member of the United States at the highest level.

Richardson is grateful to his loved ones and others for helping to make a career in the Marine Corps possible.

“There have been countless military leaders who have helped and inspired me along this journey, but I can’t thank anyone more than my wife,” Richardson added. “My wife and the support she has given me over the past 12 years is irreplaceable. My accomplishments are his accomplishments.

DBC Tura organizes a quiz at the zone level