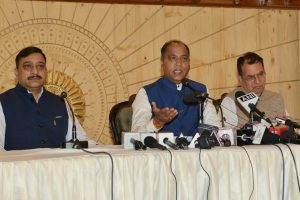 Praising Prime Minister Narendra Modi as head of government for his achievements in eight years of rule, Himachal Pradesh Chief Minister Jai Ram Thakur said on Monday that Modi had forged a new identity for India at the World level.

Speaking to Shimla media, Thakur said that no prime minister in the country has faced a crisis like the coronavirus pandemic and despite these challenges, the Modi government has not only overcome the challenges but ensured global development in addition to relieving all layers of society.

He praised Modi for successfully completing an eight-year term and said it was under his leadership that the country forged ahead on the path of development with a new identity at the international level while effectively managing the crisis. of Covid.

During the visit, the Prime Minister will release Rs 21,000 crore for about 80 crore farmers under Prime Minister Kissan Samman Nidhi of Ridge Maidan tomorrow and interact with beneficiaries of 16 central government schemes.

Modi will travel to the state again on June 16-17 to attend the chief secretaries’ conference at Dharamsala in Kangra district, he added.

He expressed his joy that Prime Minister Modi had accepted Himachal government’s proposal to hold an event at the end of 8 years of BJP-led central government and said a national level program was being held. in Shimla on this occasion.

Chief ministers of all states, about 17 lakh beneficiaries of various government schemes will virtually participate in the function and 50,000 people from 11 districts of Himachal will also be part of the function.

All arrangements have been made for the Prime Minister’s gathering and it has been assured that the public will not suffer from the event, the CM said.

The CM said Modi had a long association with Himachal and that was the reason why he gave all the help he could, sometimes without even the request of heads of state.

He also responded to the Congress leadership’s accusation of lowering the dignity of CM’s post by going door to door inviting the people to the event and said in front of CM, he is a BJP worker, he therefore fulfills his duty by doing so.

He also criticized the Bhagwant Mann-led AAP government in Punjab for the death of Congress leader and singer Sidhu Moosewala and said the government had withdrawn its security without thinking of the consequences.

It has only been two months since the AAP came to power in the state, but the law and order situation had already turned critical with gangsters roaming the streets openly with AK-47 rifles, he said. he adds.