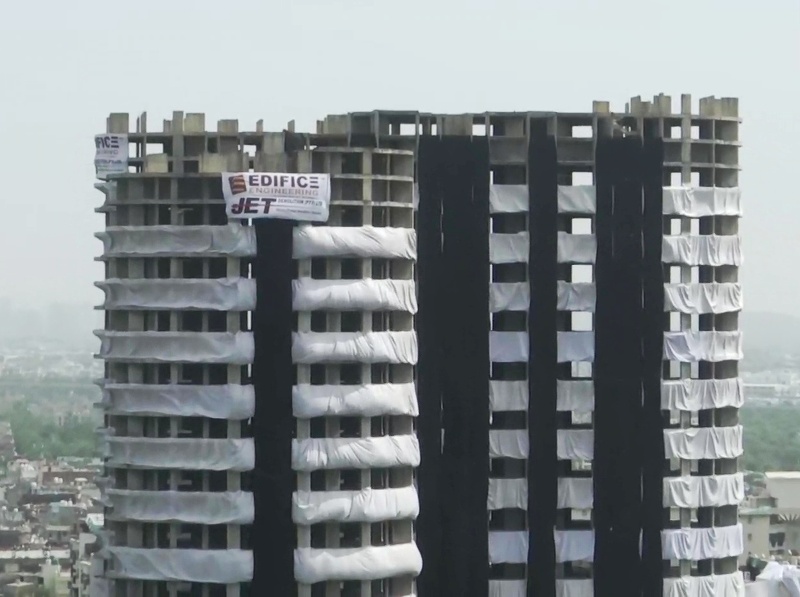 Noida: The Supertech twin towers in Noida were demolished in a massive explosion on Sunday after the Supreme Court ruled their construction to be in violation of standards.

The demolition follows a nine-year legal battle, for which the area was evacuated.

Provisions have also been made to ensure that adjacent structures are not affected by the explosion.

Around 7,000 residents of the area were asked to relocate ahead of demolition. Nearly 2,500 vehicles were parked outside the area. After the green light, the gas and electricity supply will be restored in the adjoining buildings at 4:00 p.m. and residents will be able to return at 5:30 p.m.

Officials said traffic on the Greater Noida highway within the 450-meter prohibited zone will be halted for half an hour and 15 minutes on either side of the blast from 2:15 p.m. to 2:45 p.m.

What is the solution?

Mumbai-based Edifice Engineering was tasked with demolishing the two towers after a nine-year legal battle and is working closely with the Central Building Research Institute and Noida authorities.

The demolition order was passed by the Supreme Court after finding that their construction on Emerald Court company premises was substandard.

According to reports, the builder had an initial plan to build 40 floors in each tower. While some floors could not be built due to court orders, some were manually dismantled before the explosion.

One of the towers, Apex, now has 32 floors while the other has 29. The plan was to build over 900 apartments, two-thirds of which had been reserved or sold.

The Supreme Court has now ordered the developer to provide reimbursement with interest to those who purchased apartments in the structure.

Residents of Supertech Emerald Court relocated the court in 2012 after the towers were approved as part of a revised building plan.

They said the towers were built on a site where a garden was originally planned. Irregularities were found in the approvals and some officials faced action.

The Allahabad High Court ordered the demolition in 2014. The case was later taken to the Supreme Court. Last August, the court gave three months to demolish the towers, but it took a year due to technical difficulties.