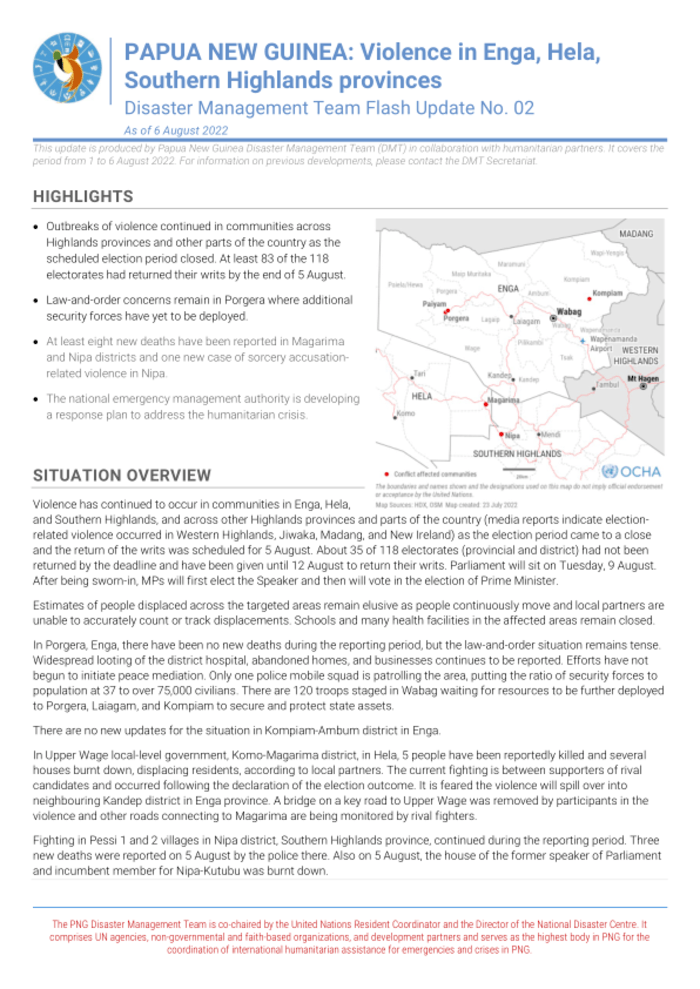 This update is produced by the Papua New Guinea Disaster Management Team (DMT) in collaboration with humanitarian partners. It covers the period from August 1 to August 6, 2022. For information on earlier developments, please contact the DMT Secretariat.

Violence continued to occur in the communities of Enga, Hela and the Southern Highlands, as well as in other Highland provinces and parts of the country (media reports that election-related violence occurred in Western Highlands, Jiwaka, Madang and New Ireland) as the election period ended and the return of the writs was scheduled for August 5. About 35 of the 118 constituencies (provincial and district) had not been elected on time and had until August 12 to return their ballots. Parliament will sit on Tuesday, August 9. After being sworn in, MPs will first elect the President and then vote for the election of the Prime Minister.

In Porgera, Enga, there were no new deaths during the reporting period, but the public order situation remains tense. Widespread looting of the district hospital, abandoned houses and businesses continues to be reported. Efforts have not begun to initiate peace mediation. A single mobile police squad patrols the area, bringing the ratio of security forces to population to 37 for more than 75,000 civilians. There are 120 troops stationed in Wabag waiting for resources to be deployed to Porgera, Laiagam and Kompiam to secure and protect state assets.

There are no new updates for the situation in Kompiam-Ambum district in Enga.

In Upper Wage Local Government, Komo-Magarima District, Hela, 5 people were reportedly killed and several houses burned, displacing residents, according to local partners. The current fighting is between supporters of rival candidates and took place after the announcement of the election results. There are fears that the violence could spill over to neighboring Kandep district in Enga province. A bridge over a key route to Upper Wage has been removed by participants in the violence and other routes linking to Magarima are being watched by rival fighters.

Fighting in the villages of Pessi 1 and 2 in Nipa District, Southern Highlands Province continued during the reporting period. Three new deaths were reported there on August 5 by the police. Also on August 5, the house of the former Speaker of Parliament and outgoing MP for Nipa-Kutubu was set on fire.

Health services, including the treatment of people injured in the fighting, in Nipa have been affected. The rural hospital in Nipa and the health center in Koima are severely understaffed and face shortages of medicines and basic supplies. In addition to the 9 women from Enga who were abducted and tortured – four of whom died – due to witchcraft accusations on July 28, a woman from Nipa district was reportedly accused of witchcraft and tortured and burned during the period considered. She was rescued by staff from a local civil society organization, but her current condition is unknown.

Sources from Nipa district say the rivals erected roadblocks along the road leading to the district to monitor the movements of their rivals. This affects the movement of residents as well as the delivery of goods and medical supplies.

The Highlands Humanitarian Center at Mt Hagan held a preliminary meeting on August 3 to discuss local coordination of the response. CARE and Baptist Union will share leadership of coordination there. Six 24ft containers are available to pre-position donated relief items, but there are concerns that this will not be suitable for the planned humanitarian response.

The National Disaster Center organized a meeting of key stakeholders on August 4 to better understand response capabilities and possible assistance from international and national partners. He will convene a meeting of government partners, including the military and police, to plan the national response and develop a security plan to allow safe access for aid workers to carry out assessments and deliver needed relief items.

The disaster management team is drafting a 9-month humanitarian needs and priorities plan to target 78,000 of the most vulnerable and marginalized in support of the national government’s planned response. The DMT plan is expected to be shared with donors early next week.

Status quo or not? It's the election question as London Mayor Ed Holder backs Josh Morgan for top job

On Religion | An evangelical caught in the political crossfire – Times-Standard