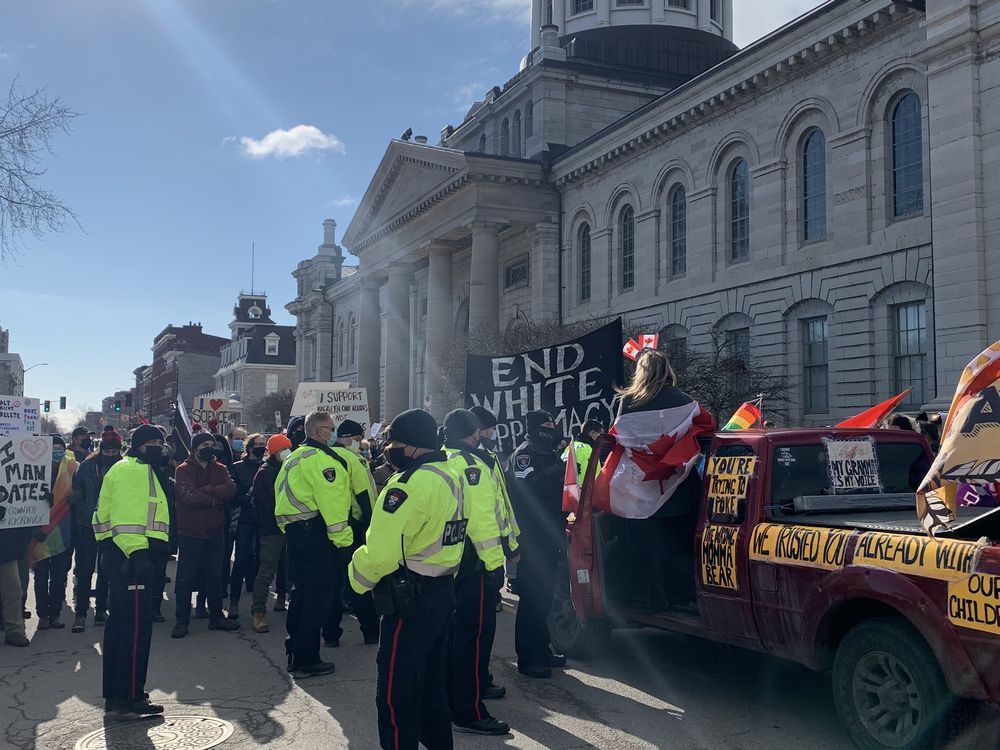 A planned protest outside Kingston City Hall in support of the ‘Freedom Convoy’ was thwarted by counter-protesters on Saturday afternoon.

The ‘downtown slow roll’ was scheduled to take place between 1:30 and 3:30 p.m. Saturday and saw cars slowly rolling from Gardiners Rd. and the 401, to Kingston City Hall for a planned protest against public health regulations.

In response to the planned event, more than 100 counter-protesters arrived outside City Hall to protest the event, holding signs saying ‘End White Supremacy’, ‘Individual freedom without accountability is called the childhood” and “Nazis F**k Off”.

Concerns about the fascist and racist messaging of the Freedom Convoy protests have been raised since day one. A key event organizer, Pat King, is a known white supremacist, and many known white supremacists have expressed support for the protests. Hateful and racist symbols, including Confederate flags and swastikas, were seen in the crowd of protesters in Ottawa, and the Gadsden flag – a far-right symbol – could be seen flying at the back of a truck in Kingston on Saturday.

As a healthcare worker, Legere has seen firsthand the impact of public health measures on protecting vulnerable members of society.

“I am a healthcare worker and had just lived in a house where there was an outbreak. I saw the difference between people who get mildly ill (from the vaccine) and people who die. We want to make sure that we protect our vulnerable citizens. That we protect our children and we protect people who cannot get vaccinated,” she said.

For Tammy Greening, support for the “Freedom Convoy” stems, like many, from a place of fear and anger. Many pro-convoy protesters could be heard shouting that they had lost their jobs and could not pay their bills because they had not been vaccinated.

Greening says she understands the collective responsibility to protect vulnerable members of society from COVID-19, but draws the line at job loss.

Greening was a member of the Canadian Armed Forces, but lost her job because she won’t get vaccinated. She says she has four or five friends who suffered a vaccine injury after their second dose. Although there are reported cases of vaccine-related injuries, according to Health Canada, only 0.047% of vaccines resulted in adverse effects, including mild ones.

Comparing vaccine mandates for employment to policies of segregation is a false equivalence. Such comparisons are unequivocally incorrect and ignore the anti-black racism and structural violence black people experience under segregation policies in the United States. This comparison is particularly stark in a context where symbols of the American Confederacy, such as the Confederate flag and the Gadsden flag, were proudly waved in support of the Freedom Convoy.

It was these tensions – a call for individual freedom at the expense of others – that took center stage when the “downtown roll” arrived at City Hall on Saturday.

As the first car arrived, counter-protesters moved quickly to block Ontario Street, moving orange barricades across the road and standing arm in arm in front of oncoming traffic.

After ten minutes, and with no sign of counter-protesters, the first and second ‘slow roller’ cars were forced to turn around and head up Brock Street, while the rest of the cars were diverted from the City Hall, as counter-protesters cheered and chanted “Go home!”

As the “downtown slow roll” was quickly diverted, the 50-60 participating cars soon resumed their protest, driving through the town center, although counter-protesters continued to thwart their efforts with cyclists and pedestrians once again blocking traffic on Princess Street as car horns blared throughout downtown Kingston.

Once the roads were cleared, the “Downtown Slow Roller” continued through downtown honking their horns and sounding their sirens for another 15-20 minutes before the protesters left.

At 4 p.m., the usual sounds of city bustle were the only thing to be heard in downtown Kingston.