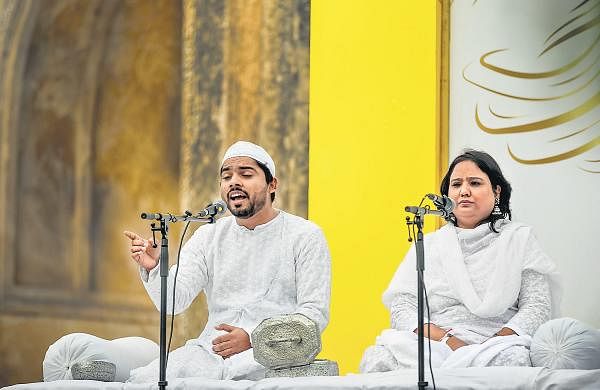 The earliest storytelling memories for many of us would most likely have been a collection of folk tales told by our grandparents. As you trace its roots, you’ll find that the oral tradition of storytelling was common to ancient civilizations, with Greek poets like Homer pioneering the art form.

Similarly, the Persian art of storytelling called dastangoi – it is derived from the Persian words dastan meaning “story” and goi meaning “to tell” – dates back to the 13th century and was introduced to Delhi in the 16th century.

Performed by a dastango or storyteller, this traditional style of storytelling – devoid of props and drama – was once considered a male-dominated space. But that didn’t stop South Delhi resident Fouzia Dastango, who defied the gender stereotype in this area to become a dastango woman.

Fouzia’s fascination with the art of storytelling began at an early age, when she listened to folk tales told by her mother and grandmother. In fact, she attributes her success to the aforementioned women.

Although she was aware of the dastangoi tradition, it was not until 2006 – when she experienced a performance – that her love for the art turned into an obsession. This prompted her to foray into the world of storytelling.

Given her schooling in Urdu, Fouzia has always been passionate about the language. It was this love for her mother tongue that drove Fouzia to pursue a career as a dastango. Expressing how mesmerized she was by the dastangoi performances, which focus on a rhythmic pattern and are “larger than life” in appeal, she shares, “It’s not just storytelling. than the performer and it cannot be flat. The script must have a certain color, a certain chatkara [zest] to that.”

While working as a speaker, Fouzia researched stories to incorporate into her scripts. She also played dastangoi in her spare time. “It was getting hard for me. Every time I had a show, I couldn’t take a day off. However, I was adamant about not giving up,” she says.

With this in mind, she decided to dedicate all of her time to pursuing this art form. In 2014, she became a full-time dastango.

In a space considered to be dominated by men, Fouzia has managed to carve out a place for herself. Unfortunately, she often faced artistic obstacles due to her gender. “Most of the male dastangos were very territorial about the art,” she mentions.

Fouzia, however, decided to redefine the tradition in her own way. Whether deciding what clothes to wear for a performance, what kind of stories she planned to recite, or even how she would tell them, Fouzia developed a contemporary take on this age-old art form. “I always say, just because something hasn’t been done before, does that mean it can never be done again?” she nods.

Taking a contemporary and innovative approach to dastangoi, Fouzia – she works with Danish writer-director Iqbal – uses this platform to give her perspective on the world around her. “Through my performances, I try to iterate the things I want to say to society or the things I want to see in society,” Fouzia shares.

Making a point of addressing social issues through her performances, she performed a dastangoi titled Dastaan-e-Rape, centered on the Nirbhaya rape case in 2012. “I use art to transfer my feelings around the world,” she added.

A recipient of Old Delhi’s ‘Ganga-Jamuni Tehzeeb’, she also tries to bridge the gap between Hinduism and Islam – Fouzia has performed Dastaan-e-Mahabharata, Dastaan-e-Rama and even Dastaan-e-Radha Krishna in Urdu.

“A lot of people point out that I shouldn’t do Mahabharata and Ramayana as a Muslim woman. I find that very strange. This is the India I was born in and raised in,” he adds. -she.

Like other artists, Fouzia has also dabbled in virtual performances amid the pandemic. Calling it a failed attempt, she concludes, “A dastango needs a live audience as much as the audience needs to see the performance live. It is impossible to capture the reaction of the public virtually. Most of the time, I felt like I was playing for an empty screen and wall.”