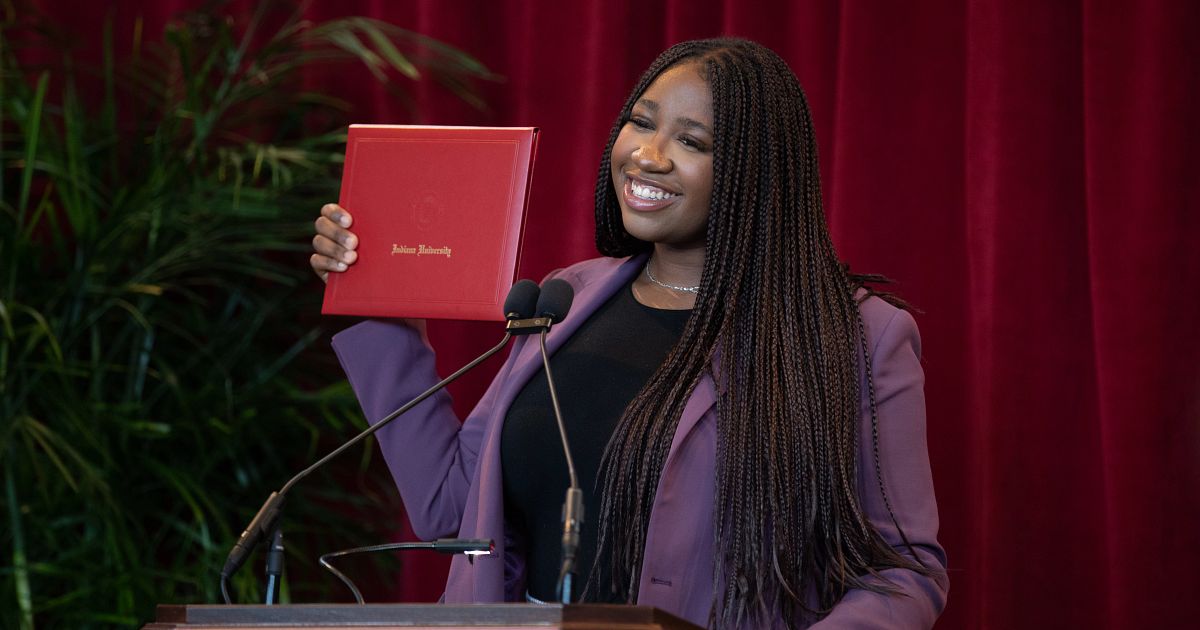 Jordan Davis has a message for his fellow seniors at Indiana University: “We are responsible for reinventing our world, and we shouldn’t accept the status quo.”

She will share this message as a student speaker at IU’s Spring Undergraduate Kickoff Ceremony at 10 a.m. on May 7 at Memorial Stadium. The graduation ceremony will take place at 3 p.m. on May 6 at Simon Skjodt Assembly Hall.

Davis’ message is rooted in her personal experiences and observations, and forged by her desire to make the experiences of all IU Bloomington students more inclusive and equitable.

“As a black woman in a predominantly white institution, when I walked into many rooms early in my career at IU, I found myself thinking, ‘That doesn’t seem right. Or, ‘There should be more people here who look like me.’ Or “There should be more women leading this room,” said Davis, a Kelley School of Business student majoring in marketing and international business.

“Just questioning what I was seeing and being told was ‘normal’ was important to me because I’ve always had this curiosity and wondered why things are the way they are. .”

This curiosity and questioning has driven Davis to engage with student leaders, groups and projects to rethink and reimagine what is considered “normal” on campus.

The Dayton, Ohio native joined IU’s student government as a sophomore, serving as director of health and wellness. She worked with the campus facilities operations unit on inclusion policies to create an equitable task force that implemented sanitary products in all washrooms for all genders. The goal, Davis said, was to make the campus more inclusive for non-binary and transgender students, and to take a holistic approach to health and wellness for students from all backgrounds.

Davis became involved in Kelley’s student government as a junior. As Vice President of Outreach, she was instrumental in establishing the Black Student Action Committee, launching the school-wide “I am, I am not” campaign. and the creation of legislation that requires diversity on the panels of student organizations. The Black Student Action Committee provides an arena to address grievances and make the Kelley School more inclusive for prospective Black students, Davis said. The “I am, I am not” campaign aimed to dispel stereotypes and promote inclusion and diversity.

“All of us, regardless of who you are — majority, minority — we’re all stereotyped in one way or another, so let’s talk about those stereotypes and raise awareness about them and how we contribute to them,” Davis said. “It was a really cool school-wide campaign that touched different IU campuses.”

Legislation that Davis co-authored for panel diversity, which was approved by Kelley’s Student Government Executive Committee, requires Kelley student organizations to have one panelist who is female or non-binary, and one panelist who either black, aboriginal or a person of color. Organizations are also encouraged to feature other levels of diversity on the panel, such as someone from the LGBTQ+ community, a military veteran or active military member, or someone with a disability. Davis said student organizations cannot obtain funding or marketing for events that attract outside guests unless representation policies are followed.

“Everything I do has future students in mind. At the end of the day, I always think, ‘How does this affect future students who come after me? ‘” said Davis, recipient of the 2022 Herman B Wells Award, which honors an outstanding senior who has excelled academically and is an established leader at IU. “A lot of what I’ve done and other student leaders have done is dismantle systems, break things down and put them back together. We’re doing it because students five or 10 years from now will benefit greatly. and won’t have to go through the same barriers and obstacles.”

Clark Barwick taught Davis in a specialized course in business communication. As a mentor and the person who recommended her for the role of student lecturer, he said he was impressed with Davis’ efforts to make IU more aware, responsible and compassionate.

“As a black woman, Jordan took on an important and very public role at IU when the racial and social injustice of 2020 forced us to consider systemic and institutional racism,” Barwick said. “I couldn’t have been more impressed with his courage and willingness to lead and push for change in a way that would have been unthinkable to me when I was a sophomore in college.”

Barwick said he was certain that whatever career path Davis chose, she would continue to be an activist and stand up for those who have no voice in society.

Davis’ near future includes employment as an associate consultant at Bain & Co. in Chicago, where she will assist clients with strategic and management issues. In the long run, however, his dream is to be an Oprah Winfrey-level talk show host.

“I want to make sure that I’m just a great role model for young black women and for women in general,” she said. “I want it to have the elements of a talk show, like talking with celebrities and trying to make sure people feel connected to the people they look up to, but at the same time finding ways to give back to people. communities that are marginalized.

“I would like to make sure that I can financially empower other communities around the world and ultimately bring people together.”

Davis’ ability to connect people through meaningful action is something Kelley School Dean Idalene “Idie” Kesner noted in her nomination letter for Davis as the keynote speaker. students. Kesner said Davis championed students, created a sense of community and inclusion, served as a mentor, and focused on student health and wellness.