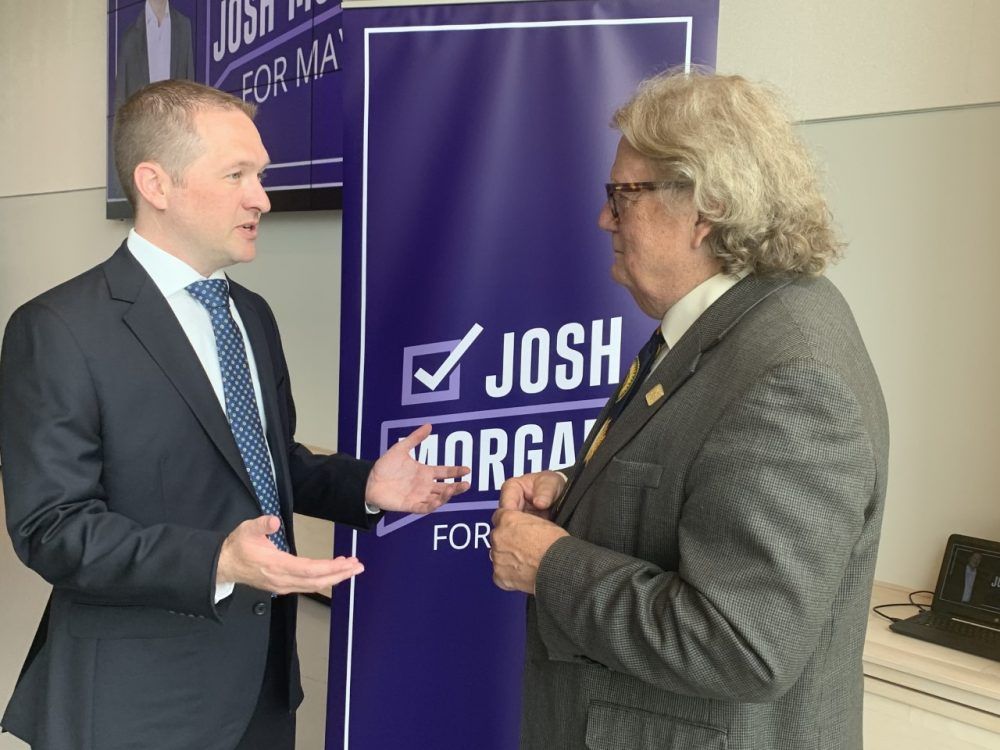 The quiet civic elections looming in London offer voters a key question, said a seasoned political watcher: Are you happy with the status quo?

Mayor Ed Holder threw his support behind Deputy Mayor Josh Morgan’s mayoral campaign on Friday, a move expected since Holder announced earlier this summer that he would not seek a second term. By endorsing Morgan as a “master” of consensus building and the “right person for the job,” Holder’s endorsement could bolster the existing base of supporters and donors for his second-in-command.

It also highlights the lack of action in what is usually the hottest race in a municipal election. Morgan, the councilor for Ward 7, has a major challenger with political experience, former MLA Khalil Ramal, and six others with little name recognition seeking the top job.

There are two weeks left until nominations close, which means the window is pretty much closed for a serious mayoral candidate to enter the race, given the hundreds of thousands of dollars needed for a strong campaign.

“It’s the only time the community has a chance to say ‘we have to go this way or this way’. Even if there are no big problems, you kind of affirm the status quo. Do you really think this is a time we can be contents in the status quo? Are you happy to be in the river we float on? »

There are big issues at play in London, as in other municipalities, Woolstencroft pointed out, from housing shortages to homelessness to the way people work and travel.

“Here’s your chance to join the inner group and make decisions about policing and what we do with the encampments,” he added.

Waiting for Josh Morgan’s election campaign announcement here at Museum London this morning.
Mayor Holder is the special guest.
Waiting for him to pass the torch to his deputy mayor.
Holder announced earlier this summer that he would not seek a second term. #LdnOnt pic.twitter.com/DQvgd0jO0W

Holder called Morgan the steady hand London needs to follow through on key priorities and build on the work of this City Council during the Friday morning announcement at Museum London.

Morgan outlined some of the campaign’s early priorities, including bolstering London’s reputation as a major player in southwestern Ontario.

“I intend to take us to the next level as a major influencer,” Morgan said. “I’m running because I believe in our city and I think we can seize this opportunity.”

Morgan, a second-term councilor representing north-west London, was first elected in 2014. He worked in the administration of Western University’s local government program until he take leave last year.

Londoners go to the polls on October 24.

District 2 Com. Shawn Lewis and Ward 12 County. Elizabeth Peloza is running unopposed at this point. There’s still time for challengers to register – nominations close August 19 at 2pm – but without any further nominations, the two would be acclaimed.

Ward 11, which will open with second-term councilor Stephen Turner not standing again, promises to be an interesting race with two well-known Londoners battling for the seat. Turner supported environmentalist and former Urban League president Skylar Franke. Jeremy McCall, chairman of the Dad Club London, is also a candidate and has a large network due to his charity work.

Another Londoner well known for his volunteer work, Sarvarinder Dohil, is seeking the Ward 8 seat held by Coun. Steve Lehman. Co-founder of the Guru Nanak Mission Society and London Transit ticketing clerk, Dohil sparked some public interest when he applied.

Western law professor Sam Trosow, a progressive voice who has been watching City Hall and city policies closely for years, is challenging Ward 6 Council Mariam Hamou. Trosow has served on several mayoral advisory committees, and his wife has also run for the ward seat.

There are also vacancies in Wards 3 and 4, with Councilors Jesse Helmer and Mo Salih joining Turner in stepping down after this term. These races are likely to heat up. In Ward 3, school counselor Peter Cuddy, Prabh Gill, Ainsley Graham, Saifullah Qasimi and Bob Wright run. In the Old East Village neighborhood of Helmer, there are three candidates: Transit Commissioner Tariq Khan, Matt Nicolaidis and Susan Stevenson.

Sign up to receive a curated collection of links and highlights from our award-winning news coverage, in-depth analysis and unrivaled weekday noon investigative features.

Thank you for your registration!

A welcome email is on the way. If you don’t see it, please check your spam folder.

The next issue of LFP Noon News Roundup will soon be in your inbox.

We encountered a problem during your registration. Try Again