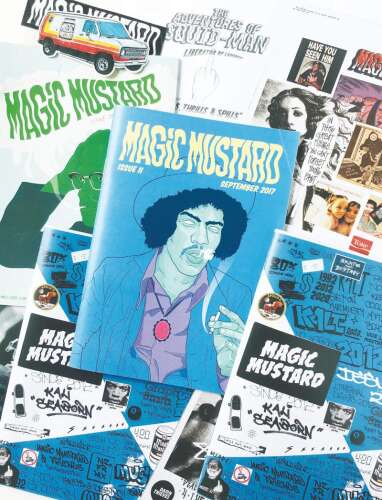 Capitalists will tell you nothing in life is free, but they’ve never bought a copy of Magic Mustard.

Free, rambling, a little anarchic and completely rad. Magic Mustard simply exists. Take it or leave it. After 10 years, number IV is in the oven.

Behind the magazine is Musty (an alias), who started the project when they were in their final year of design school.

“At that time I was taking a lot of influence from artists from the UK punk scene, street art and graffiti, the skate scene, psychedelia etc,” Musty said via text message.

“I wanted to create an independent publication that presents my interests in music, skateboarding, surfing, etc. in a way that is very free and authentic, but also quite abstract in its approach with thought-provoking themes and messages. “

Inspired by street art, Musty made a bunch of stickers and stencils and started “slapping them all over” with their homies.

The project is a bit of a “f you” for modern society.

“It’s refreshing to pick up a tangible physical object that you can sit down with a beer and really absorb, with your full attention and as you say, no strings attached.

“For this reason (among many others) I don’t share much of it online because I want people to engage with it in the ‘real world’ rather than scrolling through their phones hoping for a fraction of second of attention.”

“It doesn’t force any opinion or try to tell you what to think, it just presents it all in an abstract way and lets you interpret what it’s all about. Whether it’s environmentalism, big tech , materialism or more philosophical things, it’s interesting to see how different people interpret it.

Magic Mustard started out as a solo activity but quickly found new contributors.

â€œI kind of compared myself to that rogue artist who made zines and hid them anonymously in the corner of Wellington’s record shops and cafes with no trace of where they came from or who made them.

“And I still love that concept. But the last two issues I decided to involve some of the many super talented people I know. So there are a handful of contributors in each issue, many of them local Gizzys , and I constantly have more and more people approaching me to be part of it.

“So with that, the magazine is growing in size and so is the readership which is exciting.”

“As a youngster I was very lucky to have people supporting and encouraging me with this stuff and I love the idea that now, after more than 10 years as a designer, I’m at a point where I can start using my experience to help other young people get published and encourage them to keep creating.

â€œThe fact that it’s completely independent means you can just follow your own flow and process and push the boundaries of what a magazine is or isn’t. If he even needs a name,â€ Musty said.

The title has grown, counting 120 pages with each copy.

â€œIs it a fanzine? Is it a review? Is this a book? We do not care! But why is it free? And who did this and why? There are no ads? What’s the catch?”

Unfortunately, there is a catch. The capitalists were right. Everything has a cost.

“Sadly, the only thing keeping this next zine from being printed and landing on your doorstep is this almighty dollar,” Musty wrote on Instagram.

â€œIt would be much appreciated if you would consider dropping a little sugar in the bowl to make sure this next number hits. There are no ads, no data mining, no daddies or investors here, just 100% independent publications.

For years, Musty funded the project out of his own pocket.

“Which most people think is a ridiculous and completely stupid idea, which is probably because it’s a pretty big investment and it’s becoming less and less viable for me.”

Despite the cost, Magic Mustard will remain free and independent.