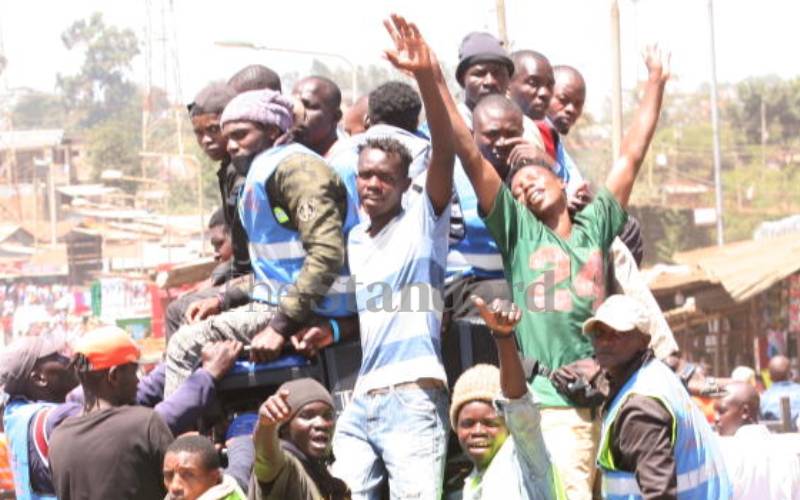 It’s the season for political entertainment as the candidates seek our votes. They started appearing on billboards and political rallies.

Mask makers made money when Covid-19 hit. From Covid-19 tests to masks, disinfectants and heat guns, they made hay when the sun shone. Political entrepreneurs will make their money.

Beyond ads, they make money from heavily publicized party nominations. Wait for official campaigns to begin.

Merchants will make caps, shukas, t-shirts, reflective jackets, among others. We will become mobile billboards.

Let’s move on from political entrepreneurship to the academic part of the polls, beyond the opinion polls popularized by Tom Wolf.

Giving a margin of error is not enough. Data science has its work cut out for polls – to “de-motivate” polls. The fact remains that emotions often win the polls, not facts or logic.

It is good fodder for academics, away from textbooks and inert ideas. What tools can we use to analyze this year’s unique polls?

Let’s start with statistics and the law of large numbers. If we have chosen a representative sample as previously described, we can predict the likely winner. Do you remember that Form 3 math that put you to sleep, especially probability? Remember the mean and standard deviation? It’s time to see him again.

Although polls are often wrong, they are a good tool for measuring political mood. One area that catches my interest is the issues that matter to voters.

Opinion polls can capture key issues and use them to segment the political message.

But there is a simpler and more effective method of extracting key questions from voters – town halls as Americans call them. You can easily extract key issues by talking freely to people or voters.

After several meetings, you reach a saturation point where the problems repeat themselves. Most major cities in Kenya had town halls. What was their use?

Are they still there? Unfortunately, you are more likely to encounter elites in town halls, not hoi polloi who are in the majority. This explains the popularity of political rallies.

We could get the same issues online via chats, but that excludes older voters, who are more likely to vote.

Such issues, in addition to the personalization of messages, determine voter turnout. Voting is not compulsory like in Australia, so something should motivate voters to get out.

Could the absence of big stakes except the next president explain why Kenyans are reluctant to register to vote?

If I were a politician and citizens were reluctant to register to vote, I would be either very worried or very happy.

Worried because by voting, we are dissipating national anger by voting for or against someone. Without a vote, how will this anger be dispelled?

Happy because citizens who have little interest in politics are easy to govern or dominate. They will not show up at public participation meetings and will decide to their detriment.

The opinions of special interest groups can be taken without their input.

Simulations and heuristics are other tools for analyzing the 2022 polls. I’m sure party leaders have number crunchers at work, using Excel and other software to simulate different scenarios.

A good simulation requires a lot of data. It can be existing data or you go to find it. With computers, simulation is a lot of fun.

By adjusting for variables such as voter turnout or coalition formation, we can simulate likely voting patterns. What does the simulation say about low voter registration and leading presidential candidates?

Heuristics (mental shortcuts that can aid problem solving and probability judgments) kick in when we don’t have the time or data for accuracy.

When we use the rule of thumb or conventional wisdom. Older people use heuristics to make decisions. Listen carefully to board decisions.

I suspect wizards use a lot of heuristics after years of trial and error. It is through heuristics that older politicians seem to have more success.

When we analyze likely scenarios, they have already made decisions using their knowledge and experience.

Heuristics are more effective, especially in unstructured situations like politics. Have you used heuristics in dating? Another tool is game theory. Who loses and who wins through coalitions or political parties?

The institutionalization of coalitions is a matter of game theory so that the winner does not take everything. The Building Bridges Initiative (BBI) was also about this. I still wonder if we can form a coalition of coalitions.

There’s nothing stopping you from using more than one tool to analyze likely scenarios as the August 9 polls approach. You can even recruit wizards, oracles and prophets.

We would like academics, from political scientists to economists, sociologists, mathematicians, psychologists and even physicists, to take advantage of the period preceding the elections to better understand local politics and society.

After all, you might have to wait another year for such free experiences. I hope we have not failed to harness the academic knowledge of Covid-19 on how we respond to disasters through to resolution and aftermath.

Let’s go out there and study Kenyan society. Believe me, Westerners have won Nobel Prizes for studying us.

Elinor Ostrom won the Nobel Prize in Economics in 2009 citing “Challenging conventional wisdom by demonstrating how local ownership can be successfully managed by local commons without any regulation by central authorities or privatization.”

Part of his job was in Masailand. 2019 Nobel Laureate in Economics Michael Kremer did some of his work in western Kenya.