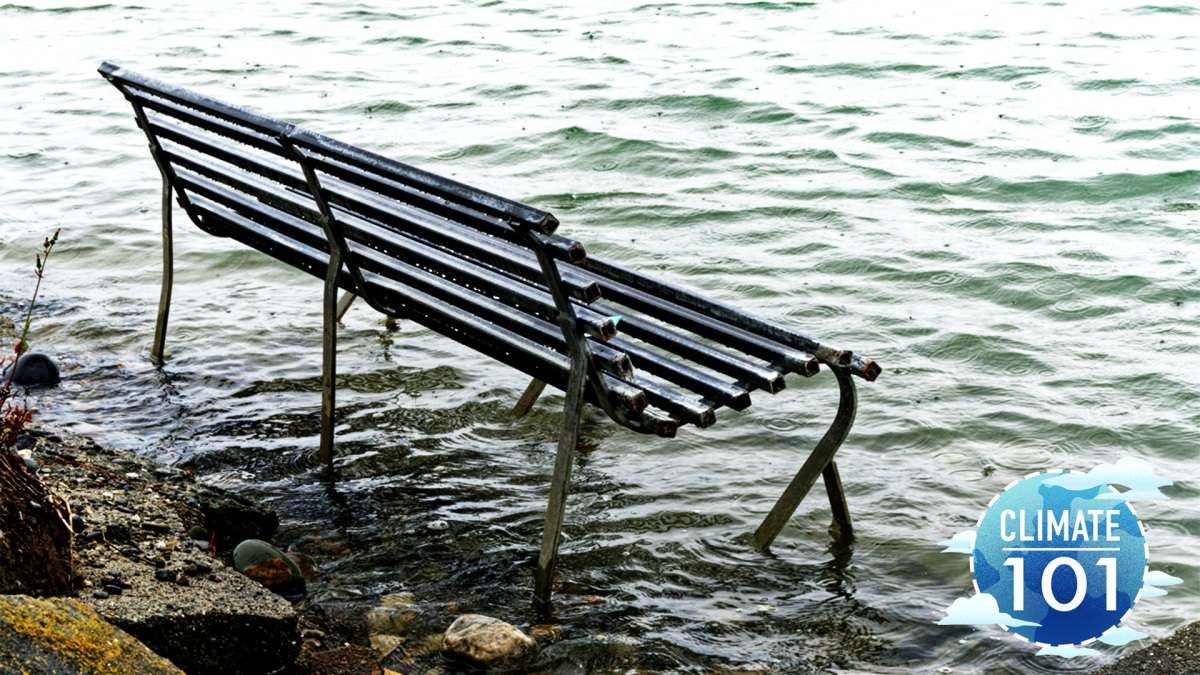 Climate 101 is a Mashable series that answers provocative and salient questions about the Earth’s global warming.

The oceans are the true guardians of climate change.

Earth’s seas absorb more than 90% of the heat that humanity currently retains on the planet, an almost unfathomable amount of energy that expands the oceans. And as Earth’s ice caps and glaciers melt into a warmer world, this new water inevitably spills into the seas.

Since the end of the 19th century, the sea level has already risen by 8 to 9 inches. But much greater sea level rise is imminent, as the planet has warmed dramatically over the past hundred years. In a new report by top researchers from various US agencies – the National Oceanic and Atmospheric Administration (NOAA), NASA, the Department of Defense and beyond – scientists predict that sea levels will rise by approximately 10 inches to one foot along the US coast over the next three decades.

In a warmer world, the seas rise faster. “Over the past 50 years, there’s been an acceleration,” William Sweet, NOAA oceanographer and one of the report’s lead authors, told Mashable.

And after 2050, the waters will continue to rise. Importantly, how much depends on how much society heats the planet by burning ancient decayed deposits of carbon-rich organisms (stored underground as fossil fuels). Already, levels of heat-trapping CO2 in the atmosphere are the highest in about 3 million years. Sea levels could rise another foot and a half this century, or even several feet.

“The ice caps are just starting to warm up.”

The melting of Earth’s massive ice caps, which cover Greenland and Antarctica, will figure prominently in the decades to come.

“The ice caps are just starting to warm up,” Josh Willis, a NASA oceanographer not involved in the report, told Mashable.

How do we know the sea level is rising

Satellites have revolutionized our ability to measure changes in sea level.

That’s because sprawling oceans – influenced by variations in temperature, geography, ocean currents and tides in disparate locations – make it extremely difficult to measure the changing seas on a global scale. But satellites in space, like NASA’s Jason-3, send radio waves to the surface of the ocean that bounce back to the satellite. This gives oceanographers an accurate record of sea surface height over large swaths of the ocean.

A vast system of tide gauges confirms what satellites like Jason-3 record from space. There are also other striking indicators. Along much of the US coastline, high tide flooding is now 300 to over 900% more common than 50 years ago, notes the NOAA. It’s also why an octopus washed up in a Miami parking lot in the middle of a high tide event. All of the evidence is clear.

“We know the ocean is rising,” said NOAA’s Sweet.

Sea level rise has more than doubled each year, from 1.4 millimeters for most of the 20th century to 3.6 millimeters at the start of the 21st century. From 2013 to 2018 alone, that number accelerated to 4.8 millimeters per year.

Over the next few decades, two factors will largely drive sea level rise in the United States and around the world.

The melting of ice caps and glaciers is responsible for two-thirds of sea level rise. But in the years to come, ice caps will play a bigger role. There’s a lot more ice to melt. How thermal expansion and added water mass (from ice caps and glaciers) add up to cause significant sea level rise.
Credit: NASA

NOAA’s Sweet, author of the Sea Level Rise Report, has great confidence in sea level rise projections over the next few decades. This is because the graphical trajectory of how sea level will rise, based on the reality that rates have risen in an observable way, corresponds to careful computer simulations, or models, of how the level of the sea will rise.

“These are two pieces of evidence pointing to similar numbers,” Sweet explained.

But beyond 2050, the trajectory of the climate, and of the oceans, is more uncertain, and largely dependent on the most unpredictable part of the climate equation. It’s us.

So the new Sea Level Rise Report has created five different potential sea level futures between 2050 and 2150, based on how much heat-trapping carbon global civilization is adding to the atmosphere this time around. century. (These five emissions scenarios were developed and carefully verified by the Intergovernmental Panel on Climate Change.)

It may sound terribly pessimistic to hear that sea levels will inevitably continue to rise after 2050. These ideas can fuel pessimism and helplessness about our climate future. But climate scientists point out that such pessimistic notions are misguided.. On the contrary, it shows that we still have a huge influence on global warming – and rising seas – later this century. “We have a huge influence on the warming that it does,” Zeke Hausfather, climatologist and director of climate and energy at the Breakthrough Institute, told Mashable..

We still have a huge influence on global warming – and rising seas – later in the century.

Compared to sea level in 2000, the “Intermediate” scenario for the United States below, which projects sea level rise of 1.3 feet by 2050 and several feet by 2100, is a world warmed by about 2°C by the middle of the century.

Importantly, there are looming unknowns about how much ice sheets will respond to different amounts of warming later this century. (That’s normal and expected: these scenarios are a “what if” guide.) That’s because Earth’s current rapid warming is historically unprecedented. Humanity and Earth scientists have never seen Greenland and Antarctica continuously melting.

“We’ve never seen those ice caps melt,” Willis said. “The last time they did that was 20,000 years ago and we didn’t notice.”

Geological records show that our great ice caps have suffered significant ice loss in the past. During a warm period around 125,000 years ago, huge amounts of ice on Antarctica melted, raising sea levels by six to nine meters. Fortunately, oceanographers don’t think this kind of melting will happen suddenly (think of a process taking place over hundreds of years). But this process could begin, perhaps during this century.

Already, the Florida-sized Thwaites Glacier in Antarctica has destabilized. “Thwaites is the only place in Antarctica that has the potential to release an enormous amount of water into the ocean over the next few decades,” Sridhar Anandakrishnan, professor of glaciology at Penn State University, told Mashable in 2020. Anandakrishnan is a seasoned researcher. of this distant and menacing glacier.

Yet, amid some future uncertainty, substantial sea level rise is still certain. About 10 inches to one foot is due around the United States by 2050. This portends many American floods.

“By 2050, moderate floods ⁠ – which are typically disruptive and damaging by today’s weather, sea levels and infrastructure standards ⁠ – are projected to occur more than 10 times more often than ‘today,’ Nicole LeBoeuf, director of NOAA’s National Ocean Service, said in a statement.

It’s not ideal. But, crucially, Willis pointed out that we can limit much worse flooding if we reduce our emissions of heat-trapping greenhouse gases. Nothing else is going to halt sea level rise. The world is not going to suddenly cool on its own.

“There are no great natural cycles that will save us,” he said.