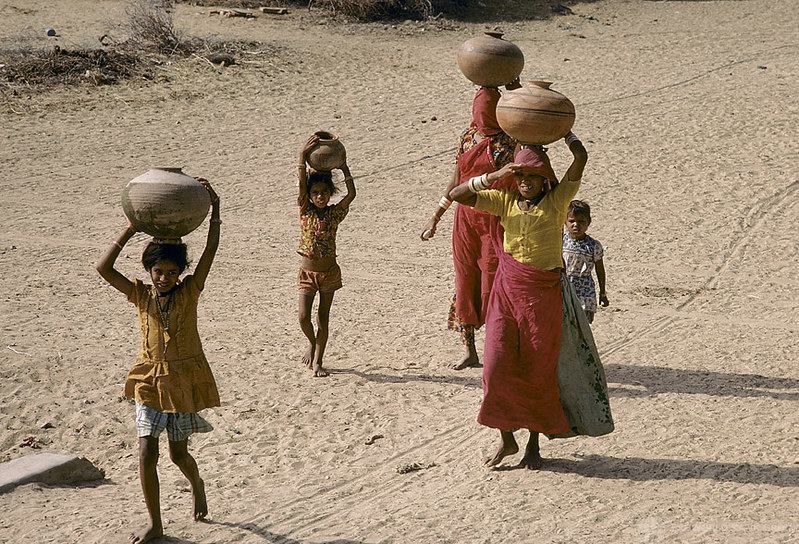 Women have shared a close association with domestic water for ages. Whether storing drinking water at home or bringing it from afar, from wells or springs, in pots, for the needs of their families. Unfortunately, when it comes to their role in decision-making for water management, women are neither consulted nor heard.

None of the government programs, such as the Maharashtra State Water Policy (2019) or the National Water Policy (2012), specifically mention gendered water needs or the role of women. in water management, apart from their numerical representation in various committees. However, some projects, such as Apale Pani and Jal Swarajya Yojana, which focus on providing clean water with the participation of women, show that women have played a critical role in their limited success.

A working paper recently published by Watershed Organization Trust (WOTR), entitled ‘Challenges and ways forward in mainstreaming gender in the water sector in arid and semi-arid India‘, explores the major barriers that affect women’s participation in groundwater management in the arid and semi-arid regions of Maharashtra.

The study was conducted in 14 villages in Ahmednagar district in western Maharashtra and Jalna district in Marathwada, where WOTR launched a Water Management Initiative (WSI) to promote water management. at the village level since 2016. In-depth interviews, focus group discussions and case study methods were used to elicit information from men and women in these villages.

Marcella D’Souza, director of the WOTR Center for Resilience Studies (W-CReS) and co-author of the paper, said: “Our study sheds light on the main barriers that affect women’s participation in groundwater management in arid and semi-arid regions. In addition to understanding these perspectives through the lens of gender mainstreaming, we could also understand, through successful case studies, what enabled these women to come forward and the challenges they faced in the process. exercise of their functions. The document also promotes strategies to enhance the role of women in comprehensive groundwater management in arid and semi-arid regions of the state.

The study shows that women were concerned about the availability of water for domestic use and were interested in preventing leaks from water taps, promoting the use of percolation tanks to increase groundwater availability and the implementation of water-saving measures, such as drips and sprinklers. The men’s interest revolved around their concern for water as it relates to irrigation as well as the need to increase water harvesting in the village through different treatments.

Women’s participation was found to be low. Overburdened with household chores, which include agricultural work in the field, women found it difficult to make time to attend regular meetings on groundwater management in their areas. Social norms and taboos also discouraged women from participating in public events.

Hirabai Banshi Ugle from Kumbharwadi said, “Whenever I ask permission from my husband to attend any training or workshop, he says for such activities he is more competent and capable and must attend these workshops. , while women should contribute to household chores and take care of children and old people at home.

The social restrictions imposed on women were confirmed by Vandana Gavande from the village of Kolegaon. “Often, societal norms don’t allow women to go out and talk to other male committee members. Women are asked where and why they go out or why they wander around the village, etc. ? Therefore, in a male-dominated society, it is difficult for women to assimilate even for good causes, such as community water management,” she said.

The weak strength of the women is also a major constraining factor for the other women participants. “If there had been more women, we would have spoken our minds. It’s difficult to speak in a room full of men with only two or three other women around. More numbers would have led to a better articulation of our concerns,” said a female WSI committee member.

Despite the fact that women are more active in agricultural work,

irrigation water or production water are considered male domains because of the high market value attached to them.

Widespread gender norms and stereotypes encourage this notion. Activities, such as the physical survey of soils and water-harvesting structures that must be itinerant in the fields, monitoring of groundwater levels and surface water availability, and calculation of the water budgeting, are technical in nature and considered a male domain.

Deepa Kaushlam, an independent researcher based in Uttarakhand, said: “No effort is made to simplify complicated technical terms or explanations for women. This glass ceiling continues to remain for them to this day. This is why their understanding of groundwater issues is limited.

Lack of formal education is also a reason as it instills a lack of confidence in women when attending meetings in public spaces.

However, there are success stories that inspire. For example, The initiative taken by Samyukt Mahila Samiti (SMS), trained under the Bhoyare Khurd Village Watershed Development Project (Solapur District, Maharashtra), exemplifies the collective strength of women in implementing a watershed micro-project program. The Indo-German Watershed Development Project in Bhoyare Village started in 1996 and ended after five years of implementation in 2001.

According to this study, Parubai Rathod, an illiterate woman from Sundarwai village in Aurangabad, brought together a large number of women on village water management issues.

“We have nothing and we are nothing without water. The government can give food grains through the public distribution system (PDS), but where will the water come from? she says.

As a woman, Parubai truly understands the precious value of water. As 100% of Sundawadi families belong to the banjara caste (nomadic tribe), there is more mobility and freedom for women when it comes to attending gatherings in public spaces. Parubai took advantage of this and formed a women’s group to support watershed development and water management in the village.

Probably the first time in Maharashtra, men and women, with advice from WOTR, have together built a special farm pond in the village to meet drinking and domestic water needs during times of water scarcity. Parubai’s role in mobilizing women for their contribution to planning, supply shramadan (volunteer work) for the construction of a pond, and the subsequent maintenance has been outstanding.

Lilabai Sonawane, another female volunteer, lives in Godri village in Bhokardan taluka of Jalna district. She is a member of the Gram Panchayat, leader of a self-help group and secretary of the village water management committee formed under WSI.

Bhokardan is prone to drought, therefore, water scarcity is one of the major problems in the region. Women had to walk long distances to fetch water for drinking and domestic use.

According to Lilabai, water availability continues to be the region’s biggest problem, with droughts recurring every two years. “If there is no water for us, no water for birds or animals, how will we continue to live?” she says. Thanks to his efforts, in a year with low rainfall, a few economically better-off families who have wells on their farms allow 10 to 15 poorer households to draw water.

The Aquifer Management Committee was formed three years ago to sustainably manage the aquifer that extends into 14 neighboring villages, including Godri. Lilabai is an active member of this committee and plays a key role in mobilizing the population and disseminating information on the aquifers in the surrounding villages.

Eshwer Kale, WOTR Principal Investigator and co-author of the paper, said: “The way gender identities and roles have taken shape in society, men have dominated the decision-making process and women have faced social taboos and stigma attached to their mobility and participation in public events. These, together with gender-based divisions of labour, are major barriers to women’s effective participation in water management.

The document calls for more concrete ways and targeted strategies in the planning and execution of programs and interventions to achieve the goal of gender mainstreaming in the water sector. Interventions are needed to increase the visibility, confidence and skills of women in water management institutions.

Swati Sinha, independent researcher and co-author of the paper, said, “With gender balance in mind, project developers should givePay attention to this vital aspect when designing water management projects, programs and initiatives at all levels – from planning to execution and from monitoring to evaluation.

The document also mentions that although gender mainstreaming has been globally accepted as an international standard for achieving gender equality, it has not yet been sufficiently successful in reducing gender inequalities, as expected at sub-national levels. national and regional. Therefore, future research should focus more on assessing the type of locally developed strategies that could help gender mainstreaming strategies and support for creating an enabling environment for men and women.

The author is a freelance journalist.

End of free coronavirus tests for millions in England